…As Min of LG, Chieftaincy and Community Matters Set to Sanction Corrupt Staff

The Anambra State Government of Prof Chukwuma Soludo is set to end the vexatious issue of caretaker committees in many communities in the state. It will be recalled that many of such committees were set up by the immediate past administration arising from leadership disputes in those communities which however turned out to be counter-productive as it engendered crises in those places, reports Jude Atupulazi.

But the new Commissioner for Local Government, Chieftaincy and Community Matters, Hon Tony Collins Nwabunwanne, last Monday said the state government had decided to arrest such issues and had already started evaluating the cases, citing the one of Nkwelle Ezunaka as an example.

His words, ‘When we came on board, we noticed that 70% of the community leaders were caretakers while 30% were elected. Now, we went through the files, tried to form a committee to look into those matters and discovered that the major problem was political; about 60% of that 70%, while the other one could be as a result of inducement or whatever you might call it, because sometimes, when you look at the file, you see no reason somebody’s tenure should be truncated and yet, creating a vacuum because you couldn’t even put a caretaker committee there. 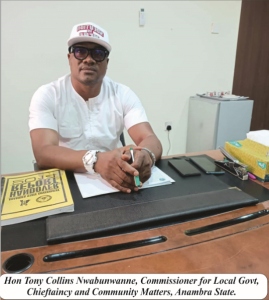 ‘On the other way round, you find out that people are elected; leaders are elected by their community and after that election, they have gone into one or two years of their own tenure; maybe a tenure of three years, you see somebody who has done one or two years and suddenly, the tenure is being truncated by mere complaint of a political intervention.

‘Maybe, it is a big politician, maybe, it is a big man or whatever you call it, and you will be asking yourself what happened? And before you know it, you are in for a caretaker that has lasted for six years, nine years, ten years. And I am asking myself, why has this thing not been resolved within this long period? And some of them, we have resolved. I give you an example of Nkwelle Ezukanaka.

We just resolved now, and the young man still has a year and six months to go, even though he has a court judgment. But after my appeal to him, he has accepted because we reinstated him based on court judgment,’ Nwabunwanne said, pointing out that the Soludo administration believed in the rule of law.

He said when the new government came on board, it found out that most of the town union leaders had court judgments but the previous government had refused to reinstate them, prompting the current government to revisit such cases with a view to taking appropriate action. He said the government’s style was already yielding fruits.

Regretting the actions of some of his members of staff whom he accused of complicity in the problems in communities, he said the ministry had set up cameras from the office of the commissioner to all the offices at the local government level and chieftaincy matters to monitor the activities of such staff members.

‘Somebody is going to be used to set an example. If we find anybody giving out anything as a means of inducement; either for them to favour one person or the other, we will expose that person.

He blamed such people for removing important documents from files to favour some people and assured that his ministry had started the process of sanitization and restructuring to ensure that any document brought to the ministry remained intact.

‘All we need is time to time to do a routine change; you do not allow people to stay there for too long, because when they get familiar with the terrain and familiar with people, of course, they are bound to do things you don’t expect,’ he said, while promising to deal with any staff member caught in such act.