In line with the commitment of Governor Chukwuma Soludo’s administration to open up rural areas of Anambra State, the state governor, September 17, flagged-off the rehabilitation of a 26km Amansea-Ebenebe-Ugbenu-Oba Ofemmili road project.

The flag-off of the road project which will be completed within 16 months was in celebration of Governor Soludo’s six years in office as the governor of Anambra State.

Other road projects flagged-off together with the Amansea-Ebenebe-Ugbenu-Oba Ofemmili road includes 26.4KM Amansea-Ndiukwuenu-Awa-Ufuma road to be completed in 4 months, while the 600 meter-stretch Isuofia-Igboukwu section of Ekwulobia-Nnobi road, popularly called Isu-Igbo River, as well as the 7.79 Kilometer Akpaka-Basilica road, Onitsha North Council Area, will be executed within four and eight months respectively.

Flagging-off the road project, Soludo disclosed that the roads were built to have at least a minimum of 20 years life span according to the pact signed between the state government and the contractors executing the project.

He assured that his administration would build a bridge across Umurum in Ayamelum LGA from Awba-Ofemili, noting that his government had a commitment with Awka North which he was bound to fulfill.

He recalled that his campaign promise to Ndi Anambra was to make a difference and assured that the projects would touch the poorest of the poor and downtrodden, adding that he would account for the limited resources in execution of projects. 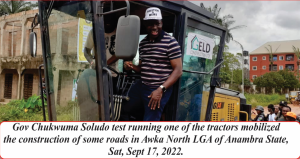 Soludo disclosed that the second phase of the project would involve the construction of a bridge from Awba-Ofemili to Ayamelum.

He said that even though the state lacked funds, his government remained committed to building roads to open up rural communities for a more prosperous economy.

Speaking on the strategic importance of the Amansea-Ndiukwuenu-Awa-Ufuma Road, Soludo explained that with the road in place, indigenes of Orumba North and South could get to Awka within minutes instead of making detours.

In his words, ‘During the campaign I said I will visit Okpoko immediately after my swearing in and I did that. Just last week Wednesday, I took all the international partners and development institutes that came to Anambra to Okpoko because we have over one million people trapped in the most unspeakable urban slum and we must rescue them, especially the children. So we have flagged-off nine roads that amounted to 14kms.

‘We went to Mmiata Anam, the only LGA in Anambra State that the headquarters is not accessible, and flagged-off the road that will be completed before January because I will drive to Nzam then.

‘I know this Amansea route very well as I often follow it through the Holy Family Youth Villag whenever the express way is blocked due to the recklessness of some tipper drivers; so we are committed to tehese projects.’

The governor assured that his administration would not leave out any part of the state as he would ensure simultaneous development of all places for collective transformation and urged the people to always come up with constructive criticisms that would help to keep him in the right track.

Speaking at the event, the State Commissioner for Works, Engr. Ifeanyi Okoma, said that the contractors assured to deliver a road project that had the durability of nothing less than twenty years, explaining that fifty percent of the contract sum had been mobilized for the contracts.

Reacting, the Transition Chairman of Awka North, Mr Emma Uche Eze, appreciated the governor and assured that the road when constructed would relieve the people of the area the stress which they went through on daily basis while commuting on the road.