… Umeoji, Others May Join Faction

Former Governor of Central Bank of Nigeria (CBN), Prof. Chukwuma Soludo, on Wednesday won in all the 21 local government areas of Anambra State to emerge the candidate of the All Progressives Grand Alliance, APGA, for the November 6 governorship election.

The election was held in Awka by the Chief Victor Oye faction of the party, which also has the support of the only governor of the party, Chief Willie Obiano, of Anambra State.

Soludo in the primary election which he contested with four other aspirants; Hon ThankGod Ibe, Hon Okwudili Ezenwankwo and Barr Damian Okolo, scored 740 votes out of the total 792 votes cast in the election. 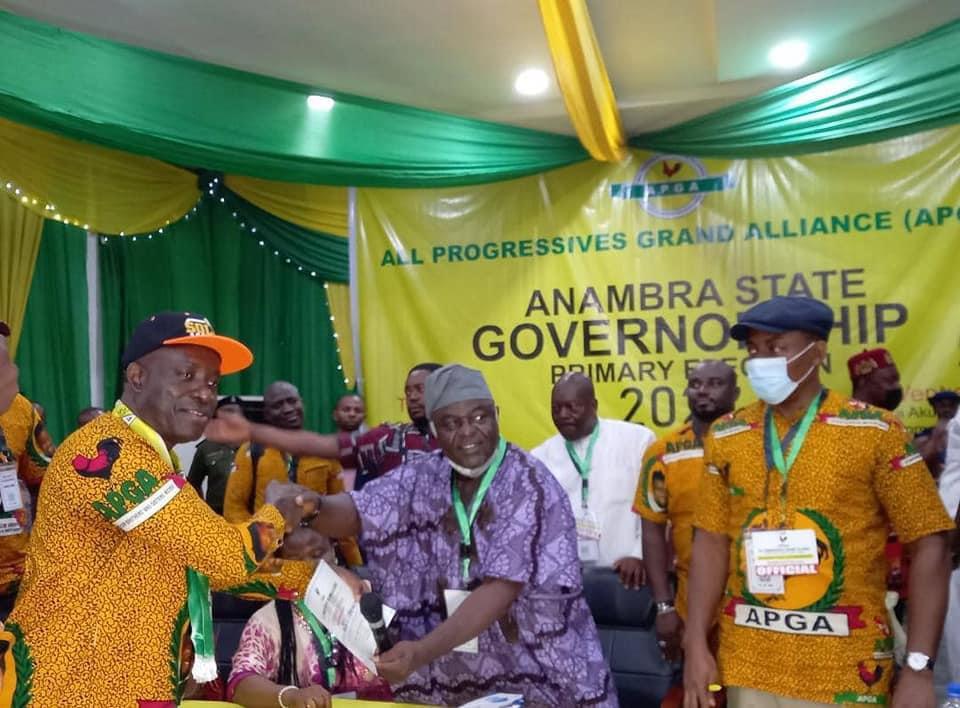 Announcing the result at Prof Dora Akunyili Women’s Development Centre, the Chief Returning Officer of the party, Mr Olalere, who is the Vice Chairman, Southwest of the party, said: ‘By the power conferred on me as the Chief Returning Officer of the election, I hereby declare Prof Chukwuma Soludo the duly elected candidate of APGA for the November 6 governorship election.’

Speaking immediately after the declaration, the Governor of Anambra State, Chief Willie Obiano, assured the candidate and members of the party that the party would again win the governorship election in November overwhelmingly as it did in 2017.

‘I want to commend the National Working Committee, and the State Working Committee, for the peaceful conduct. It is exceptional. Just know that the job has just started and we are going to win 21 over 21 local government areas again as we did in 2017.’

Soludo, in his acceptance speech, thanked the members of the party, while also accepting to be the candidate of the party. He promised to unveil his manifesto for the election in August.

Meanwhile, five aspirants of the party; Akachukwu Nwankpo, Nonso Okafor, Carter Dike, Chuma Umeoji and Ifeanyi Ozoka, who were disqualified days back, boycotted the exercise, giving indications that they may participate in the Jude Okeke faction of the party.

A media aide to one of the five disqualified aspirants who spoke to Fides on condition of anonymity, said, ‘We are not part of that charade they are holding at Women’s Development Centre today (last Wednesday).

‘I cannot tell you what we have decided for now, but take it from me, we are still members of APGA, but certainly not a part of that thing they are doing.’

When reminded that the Jude Okeke faction of the party had scheduled its primary election for July 1, the source said he could not say for sure if his principal had settled to participate in that one.

Meanwhile, there was heavy deployment of security operatives in Awka, Anambra State Capital last Wednesday over the conduct of the  primary election of the party.

The heavy deployment, it was gathered, was in response to the formation of another faction of the party, and was a move to forestall a breakdown of law and order.

The event caused heavy traffic in the entire city, with most roads in the city diverted, to the great discomfort of road users.

The primary election started with accreditation at Alex Ekwueme Square, before delegates were moved to Dora Akunyili Women’s Development Centre, Awka, for the voting.

a total number of 812 delegates participated in the exercise, while accredited delegates were 795. A total of 792 votes were cast, during the  exercise