Soludo Condoles with Hausa Community in Anambra over Killing of Mother, Kids

The Anambra State Government has condoled with the Hausa Community in the state following the killing of an Hausa woman and her four children by gunmen recently. Soludo, who was represented by the Commissioner for Information, Mr Paul Nwosu; his counterpart from the Women’s and Social Development Ministry, Hon Mrs Ify Obinabo; and the Chief Press Secretary to the Governor, Mr Chris Aburime, conveyed the government’s condolences to Mr. Jubril Ahmed, the husband of the late Hariri Jubril who was killed alongside her four children last Sunday, May 22.

Nwosu, who conveyed the condolence message from the governor to the family of the deceased At the Cattle Market, Amansea, explained that it was not a targeted attack on a particular tribe or religion.

Mr Nwosu expressed shock that people could be killed in cold blood and said that the governor would have attended but for urgent security concerns he was attending to. 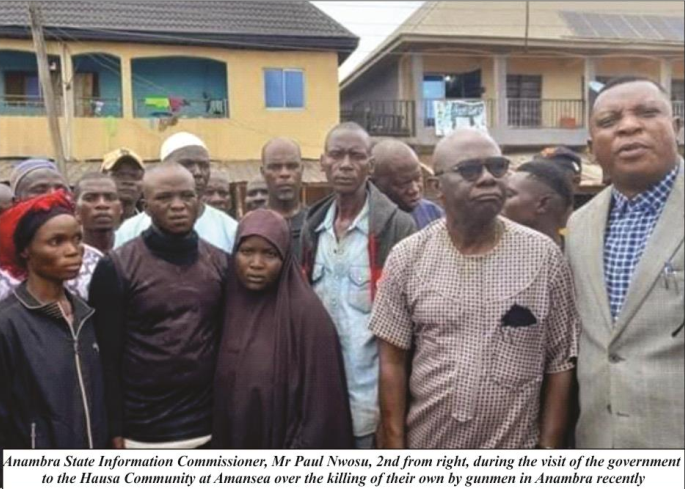 He said that Igbos and other tribes had lived together for so long in peace and harmony and urged the Hausa Community to go about their lawful businesses.

A visibly touched Mrs Obinabo, stated that Anambra people were largely travellers who were receptive of people from other tribes and appealed to the gunmen to have a rethink for the sake of their unborn generation and stop killing fellow human beings.

The leader of Miyetti Allah in the South East, Mallam Gidado Sadikki, who described the incident as horrible, thanked the governor for sending the delegation, explaining that they had lost many people and that many of their people were already leaving Anambra as a result of the incident.

While pledging their readiness to continue working with the government to enthrone peace in the state, Mallam Sidikki noted that their people living and doing business in Anambra were aware that they were not the target and recalled the lawmaker who was also killed in what he described as a gruesome manner.

The deceased’s husband, Alhaji Jubril, who works as a security guard in Anambra State, was too emotionally disturbed to express himself, though the Sarkin Chamber of Anambra State, Usman Farang, prayed that violence should stop.

The chairman, Amansea Cattle Market, Alhaji Bello Maigari, younger sister to the late Harira, Suweiba Musa; as well as the Hausa Community in Amansea, were present during the visit.

A cash donation was presented to the bereaved by the Anambra State Government.