Governor Soludo who made the call in Igboukwu when he commissioned a 3000 litre water tank built by Engr Dom Okafor, an old boy of Boys’ Secondary School, Igboukwu, as well as an auditorium renovated by the alumni association of the school within the premises, said the resources available to government could not do development work alone.

Soludo appreciated the old boys of Boys’ Secondary School, Igboukwu, particularly Engineer Dom Okafor, for embarking on the projects and observed that they were a celebration of his government’s PCPP development model because the resources available to government for development were low.

‘The roads we have flagged-off already are costing about N100 billion, not to talk of other engagements in health and other sectors. Even if you multiply what is contributed to government by five, it’s barely enough to provide all that is needed.

‘This is why we emphasize this PCPP model. What individuals and communities can do is at the heart of development,’ the governor pointed out. 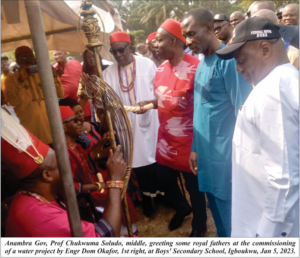 Commissioning the water project for the school, Governor Soludo thanked Engr Okafor for responding to the dire need of water in the school; even as he commended the Old Boys’ Association for the reconstructed state-of-the-art auditorium.

‘There are many communities that have taken it in their hands to develop their places. Ninety-nine percent of what government needs for development, is in private hands.

‘Part of our job is to mobilize the people to contribute their quota and take charge,’ Governor Soludo stressed, noting that they had come to the school celebrate such initiative. While appreciating the alumni for their gesture, he said that kind of initiative was about the consciousness, rather than the willingness and recommended it for individuals and communities.

Engr Dom Okafor, who is a 1985 alumnus of Boys’ Secondary School, Igboukwu, said he was inspired to take up the project when he chaired the school’s inter- house sports in 2017 and saw the need for water in the school.

Engr Okafor, who recalled that he was a deputy senior prefect of his set and saw the problems they encountered due to lack of water, added that he equally chose to take up the water project as a Rotarian. He explained that in Rotary, water and sanitation were top of their areas of focus.

The aspiring legislator for Aguata Federal Constituency expressed the hope that the reticulated water with one horse power surface water pump which was estimated at over N5m, would go a long way in alleviating the problems which the students encountered due to lack of water. He noted that the water was reticulated so that people could get water at various offices and other places in the school.

For his part, the National Chairman, Old Boys Association of the school, Mr Michael Ezenwankwo, JP, thanked God that the N17m auditorium project was completed and commissioned in a record time of two years.

He said the coming of Governor Soludo to commission the project was a morale booster which would motivate the association to take up more projects if the state government responded to their plea to execute projects in the school.