The centre, Dame Irene Okwuosa Memorial Hospital in Oraifite, Ekwusigo Council Area of the state, was built and equipped by the Oil Serve Group and Sir Emeka Okwuosa Foundation in conjunction with the VOOM Foundation of the United States of America.

Soludo represented by his deputy, Dr Onyeka Ibezim, who commissioned the hospital with the assistance of the Obi of Onitsha, His Majesty Igwe Nnaemeka Alfred Achebe, commended what he called Okwuosa’s vision, large heart and concern for citizens who could not afford a foreign medical trip. 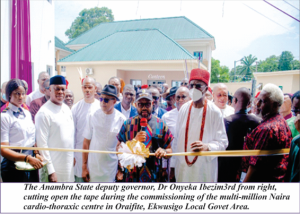 He appealed to other richly endowed citizens to come up with more such rare facilities.

The Chief Executive of Oil Serve Group, Sir Emeka Okwuosa, in his welcome remarks, stated the vision for the establishment of the referral hospital. He described it as one of its kind in Nigeria, and a one-stop shop for referral of medical cases.

He said, ‘This is the first of its kind in the South East Geopolitical Zone of Nigeria. It is equipped with human and material resources to undertake two open heart surgeries and other cardio-thoracic cases daily.

‘I conceived and executed the project with the Voom Foundation’s Management and it is expected to undertake 3,000 cases annually. We have also set up a board to oversee the affairs of the hospital.

‘This project was actually aimed at stemming the tide of overseas medical tourism, and equipped with better facilities than most hospitals where affluent Nigerians troop to, to seek medical care.’