Nwabunwanne who made the statement while addressing the members of Anambra North Traditional Rulers Council during their Zonal monthly meeting at Anambra East Local Government Area Headquarters, Otuocha, expressed delight with the choice of Soludo.

According to the Commissioner, Soludo was not relenting in his plans and efforts towards transforming the state for the better. 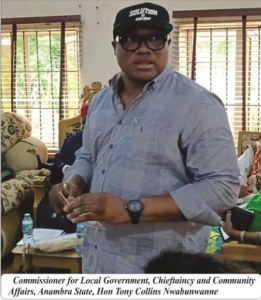 He revealed some of the plans and steps the governor had taken in the area of security, education, environmental sanitation, community peace and infrastructural development, especially roads.

‘Mr Governor is one of the best things that happened to Ndi Anambra in recent times. He is a leader who cannot jump into execution of any project without having a good plan for it.

‘He makes adequate plans that will enable him to deliver quality jobs without wasting resources. I urge you to be patient with him. I plead with you to always be crusaders of this patience I demand of you among your subjects,’ he said.

Nwabunwanne explained how a preliminary investigation his office conducted revealed that some monarchs deliberately left their various communities for months, even as he urged the monarchs to always be very close to their communities as this, according to him, would keep them informed of all the happenings in their communities and enable them to proffer immediate solutions to same with ease.

He enjoined them to extend the advice to their counterparts in other zones of the state.

Earlier in their brief, the Traditional Rulers Council, through their chairman, H.R.H. Igwe Bennett Emeka, appreciated the governor of Anambra State for the appointment of the commissioner whom they described as capable of delivering the demands of the office and who had made some positive changes within few months in the office.

They listed security issues, lack of teachers and truancy among few teachers in primary and secondary schools as challenges confronting the zone which they would like the governor to look into.

The royal fathers demanded that the state government should always carry them along while executing projects in their various communities.