Governor Soludo made the declaration during the 2nd Session of the 5th Synod of the Diocese of Amichi.

The Synod which has the theme; Strangers and Pilgrims in the World: Our Christian Status, was presided over by Rt. Revd. Ephraim Ikeakor. 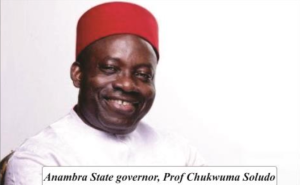 Speaking at St Peter’s Church, Governor Soludo explained that the directive to public officials is part of his administration’s proactive effort to fight corruption, adding that it is also for the sake of probity and transparency in line with stipulated codes of conduct.

“It is part of our administration’s policy to try to tackle corruption among government officials,” Soludo said.

Speaking about insecurity, Governor said everyone should join hands to address the issues of security and environment.

He drew the attention of the church to the unfortunate threat of idolatry which is gradually holding seat across the region, noting that the body of Christ, being one, should synergize and tackle the common threat.

“We must fight such development because if the church as an institution is muscled out by promoters of idolatry, nobody will be safe anymore,” he told the church.