The Anambra State Government has banned the wearing of mini-length uniforms in schools across the state.

This was disclosed by the Commissioner for Education, Prof. Ngozi Chuma Udeh, during an interactive meeting with Education Secretaries of public and mission schools held at ASUBEB Hall, Awka.

Fides reports that lately, many private and public female students had formed the habit of wearing short skirts well above knee level as school uniforms, a development some people had seen as indecent exposure.

The Commissioner for Education condemned the growing trend of such mini-length uniforms in schools, saying that such was not part of the approved dress code for schools in Anambra State. 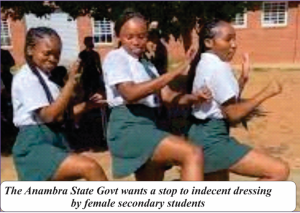 The commissioner said a student should look smart, well-groomed, project positive vibes and not be indecently dressed for school.

She added that the acceptable length for uniforms in the state remained knee length and not above the knee.

The commissioner therefore charged the Education Secretaries to ensure that schools complied with the directive in order to salvage the future of students in the state.

Her words, ‘You are the foundation. You control the formative years of the children. Let us infuse the right morals and discipline in students so they grow to be rational human beings, showing them there is more to life.

‘If we fail to get it right at this stage, we have failed to protect the future of the children.

The Education Secretaries met with the commissioner to discuss the way forward ahead of the new academic session which commenced last Monday.