Anambra State Governor, Prof Chukwuma Soludo, has been advised to shun praise singers and clannishness if he wants his administration to succeed. The immediate past Deputy Governor of Anambra State, Dr Nkem Okeke, gave this advice in an encounter with newsmen in Enugwu-Ukwu.

The former deputy of former Gov Willie Obiano, who himself had problem with his boss over similar issues, advised Prof Soludo to shun sycophants and family influences in policy decisions, noting that those were the bane of the government he served.

Okeke said only a leader with firm and strong character would not allow bootlickers and family influences to guide his policies.

‘There must be a line limit between family members, friends, relatives and associates in leadership, eggheads need to be engaged, no matter where they come from, because leadership is not a time of settlement.

‘Once the electoral process is done with, whoever occupies the seat of power should be concerned with ideals that would better the system most without sentiment,’ he said. 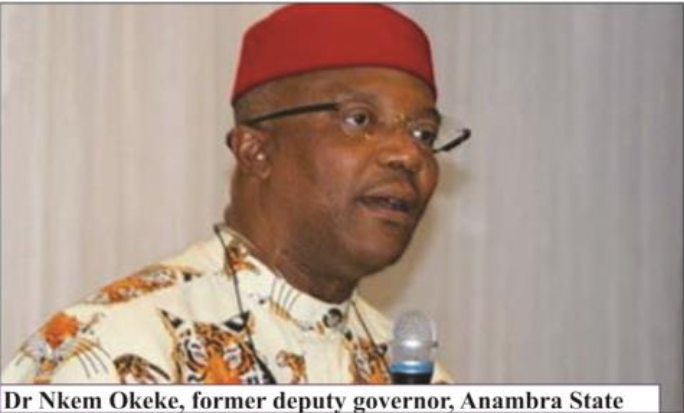 Okeke who said he was impressed with the list of Soludo’s commissioner nominees and the principal officers, said he believed they were right pegs in the right holes and urged them to advise the governor on the exact needs and aspirations of the people without fear or favour; evem as he said he expected the governor to listen to them.

On the insecurity threatening the socio-economic activities of the state and the South-East in general, Okeke said locking down businesses, closing down schools, burning down government facilities and killing of one another were not the trademark the Igbo were known for.

‘We do not need to kill ourselves or destroy our hard-earned facilities, but we should strive to acquire more, not to rebuild broken facilities but to support the new governor to achieve greater productivity in areas of agriculture, power, job creation and security.

‘If we make the environment friendly, the governor would be able to initiate ideas that would attract investors to partner the state to create jobs for the people and make our businesses grow,’ the former deputy governor suggested.

Okeke said he owed gratitude to his former boss, Chief Willie Obiano, whom, he said, gave him the opportunity to serve the state in various capacities.

‘I’m also most thankful for he made me to be the first deputy governor in the state to have served two tenures.

‘I wish to thank Senator Victor Umeh for recommending me in the first place to be given the opportunity to serve the state in the capacity of a deputy governor,’ Okeke said.

‘The Niger Bridge being constructed for the South-East; once it is commissioned, we will see APC in a different shade.

‘The 2023 general election is coming; let us have a rethink and key into the party at the centre so as to get our needs and wants; we do not need to be far, let’s open up to the reality on ground and cash in for our good,’ Okeke appealed.