The Governor of Ekiti State and chairman of Nigeria Governors’ Forum (NGF), Dr Kayode Fayemi, has described his Anambra State counterpart, Prof Chukwuma Soludo, as an asset to the forum. 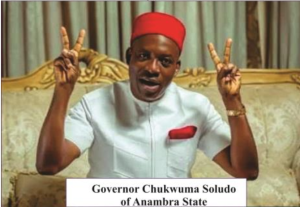 Fayemi said he was in Anambra to meet with Soludo whom he described as his longtime friend, and whose activities he had been following since he came to power.

‘Prof Soludo has been my longtime friend. He will be an asset to the NGF, and I believe that he will do an excellent job in Anambra State.

‘Anambra has been relatively lucky with focused and progressive governors, and adding Governor Soludo’s experience will transform Anambra State,’ he said.

Welcoming the Ekiti State Governor at the Anambra Governor’s Lodge, Governor Soludo stated that Anambra and Ekiti States shared something in common which he gave as human capital.

The Governor thanked Dr Fayemi for visiting and commended the NGF Chairman for the quality leadership he had been providing at the Forum, expressing the hope that a formidable synergy among leaders, devoid of political interests, would help to build a better future for the country.