It is not for nothing that all other political parties in Anambra State have an eye on what happens in the camp of the All Progressives Grand Alliance, APGA. Their apprehension is because of a certain name in that camp: Prof Charles Chukwuma Soludo. Call him a game changer and you won’t be wrong. In football parlance he is that player on whom a team revolves.

Without him, the team is vulnerable; with him, the team is complete and formidable. Soludo is that player whom opponents in a football game pray he does not play, knowing the consequences of his presence. APGA is lucky to have this kind of player and consequently, rival parties are sweating already at the prospect of meeting him, even when the game has hardly begun. This is why his team, APGA, is damn lucky to have such a feared player. 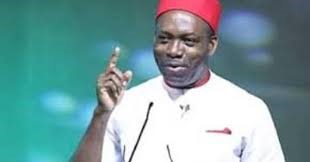 Very soon, the party, APGA, will begin the process of choosing who flies their flag for the November 6 Governorship Election in the state. Like a football competition, there are other teams; in this context, aspirants, all jostling for one goal – the party’s ticket.

The delegates of the party are the ones on whose shoulders lies the enormous task of choosing right and ensuring that the party presents a formidable candidate that will face those of other parties in the main contest. Make a mistake and the party runs the risk of losing its strangle hold on the leadership of the state. Choose right and the party becomes even stronger in the years ahead.

Ordinarily one would not have batted an eye on who emerges the sole candidate of APGA ahead of the November Guber Poll. But being that in a democracy, everyone deserves to be carried along, it will not be very appropriate to just dismiss others in the contest. But then, even football games, there’s this thing called a walkover. It happens when an opponent fails to honour a match for whatever reason.

For the benefit of the party and based on the need to save resources, a walkover would have been ideal, but in this case, other aspirants collapsing their structures for Soludo and agreeing to work concertedly for his emergence.

This is not for one moment saying the other aspirants are pushovers. Not in this life! But I’m only looking for a way to ensure that resources are not wasted; resources that would have been used to prosecute the main battle should every person close ranks for the achievement of the ultimate goal.

I started this piece by pointing out that other parties have their eyes fixated on APGA because of the man, Soludo. These parties appreciate the enormity of the task before them in squaring up against APGA’s Ijele or game changer.

They know that the presentation of Soludo as APGA’s candidate will just about signal the end of their hopes because of Soludo’s popularity, acceptance and quality. But just as his emergence as APGA candidate represents quashed hopes for opposition parties, his non-emergence from APGA for whatever reason can just as well turn APGA to what is called DOA in medical terms: dead on arrival!

The greatest mistake APGA can make is not taking the opposition seriously, especially in a state as enlightened as Anambra which has produced the timber and caliber of the nation’s politics. Indeed, the era of blind support for parties is fast becoming history.

People are beginning to take a deeper look at the quality of individual contestants, rather than their platforms. Yes, platforms still play a huge part, but it takes a quality personality on any such platform to positively sway the minds of voters.

In APGA, we are lucky to have such a quality personality in Prof Chukwuma Soludo. He is the topic which others discuss. He is the big masquerade upon whose arrival in the village square other masquerades scamper away. He is the one person who is addressed as ”have you people come?” he is APGA’s ultimate game changer and playmaker.

When such a personality is in our midst, the least we can do is to thank providence and rally round such a man and move into battle with him.

Soludo has seen it all in Nigeria. He understands the terrain and knows what it takes to keep the ship of state on the desired course. He has the advantage of already being part of the Obiano administration to a large extent, being at the head of the state’s Vision 2070.

The government of Willie Obiano which chose him to lead the vision did not just wake up and decide to choose him. He was chosen because of his proven track record of huge accomplishments.

His humongous accomplishments as the Governor of the nation’s apex bank are still reverberating. It was a position he used to put himself into national consciousness. He used the position of CBN Governor to show that he is not one to baulk at taking the hard decisions required to change things for the better.

Anambra needs one that is made of such stern stuff; not one that will use the first tenure to grope around. In Soludo, we have a man who will hit the ground running and consolidate on the stellar achievements of the incumbent administration, having already been a part of it.

Anambra needs a man that will command the respect of his colleagues as governor; a man that will need no introduction to international institutions; a man everyone will readily listen to any time he opens his mouth.

As the primary election of the ruling APGA beckons, and as the party prepares to confront others in the main election, who else to turn to than the one and only acknowledged match winner? He is Prof Charles Chukwuma Soludo!