Soludo and the Vuvuzela Blowers

During the 2010 FIFA World Cup in South Africa, the footballing world was introduced to a new method of supporting teams. That new method was manufactured in South Africa by South Africans using a trumpet-shaped horn that produced a loud buzzing sound.

Listening to it from afar, you could be forgiven for mistaking the sounds to be emanating from bees. The sounds could be quite disturbing, I tell you. Since that World Cup, the vuvuzela has found its way into the lexicon of many languages to depict those who seek attention by overpraising.

Yes, the Anambra governorship election is long over, with the losers licking their wounds and biding their time for another onslaught at the coveted seat at some other time. But beyond this is the undercurrent of manoeuvrings by interested parties to land appointments in the incoming government. To achieve this, some of those involved are bound to pick up their vuvuzelas to blow Soludo’s praise to high heavens.

These are people for whom Soludo will never do any wrong at the moment. They will clap if he smiles and dance if he says anything; even if they do not understand what he says. That is the nature of our people when they are after something.

I recall advising the outgoing governor, Willie Obiano, shortly after he assumed office, to beware of such praise mongers and not allow them to distract him. I remember telling him not to listen to anybody who told him that time that he was the best thing to happen to the state because, having not been visible before then in the politics of the state, it was well-nigh impossible for anyone to have known him so well as to project him as the next best thing to Jesus. The rest, as they say, became history.

Now another man is about to take over the helms. I’m aware that many have already started jostling for positions. This, in itself, is not bad. Few men would baulk at the opportunity of bettering their lot which a government appointment invariably brings. Even yours truly would not be averse to getting something. But then, what rankles is when this is done by painting others black.

Really, some people believe that the more they paint others black, the more their chances increase. These people are usually clever. They study the new man to see the kind of person he is; whether he is such that loves gossips or such that is ready to bite fingers that fed him. 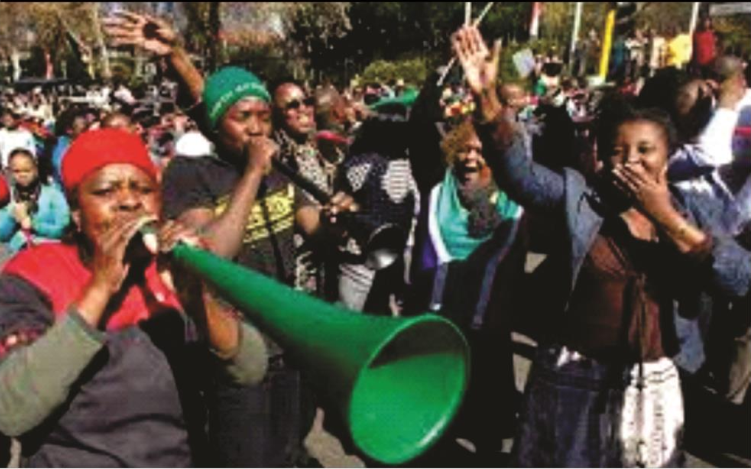 Once they establish, for instance, that the new man has an axe to grind against his predecessor, they will inundate the new man’s office with tales of the ”sins” of the predecessor. They will tell how the predecessor emptied the coffers in order for the new man not to outshine him. They will even promise to show documents to prove their allegations. This is where hustling for positions gets bad.

Soludo, unlike Obiano during his early days, is already well known. So you can expect the vuvuzelas to be blown loudest. If it turns out that Soludo is the vain type who is moved by praise, God help him in the hands of these people. It will, indeed, require strong will and maturity not to be swayed by praises and adulations.

Souludo should focus, for now, on things that would be needed to take the state higher than where he met it. He should not allow himself to be distracted at this early stage by the vuvuzela blowing crowd. More importantly too, he should not dispense energy looking for ways to discredit his soon to be predecessor, Obiano.

No matter what he may discover at any stage, he should privately seek clarifications from Obiano rather than do so on the pages of newspapers or social media handles. The state should be spared the kind of spat we saw and are still seeing between Obiano and his predecessor, Peter Obi. That spat is one of the most unfortunate things to have happened to the state.

I believe that no matter how bad a regime seems, there must be something to learn from it. And that is the case in the regimes of Obi and Obiano.

One thing learnt from Obi is that he never gave room to the vuvuzela blowers to come near him, not least, hijacking his government. He was truly in charge from Day One and made governance a serious business. That was how he was able to navigate all the land mines sown for him by opposition elements at that time.

It included surviving a hostile house of assembly and eventually winning them to his side, as well as surviving an impeachment. Thus, if anything was to be learned from the governance style of Obi, it was firmness, as well as astuteness.

As for the government of Obiano, the major thing to be learned is how he was able to invest in human beings. Apart from carrying on other duties required of his office as governor, he recognized the need to make those around him smile and whatever anyone has to say about this, it was a vital element that ensured his survival. In fact, in years to come, all those he helped and all those helped by those he helped would be singing his praise. He showed that governance is way beyond providing physical infrastructure.

Soludo has to find a way to accommodate the two major traits of his predecessors when he assumes office on March 17 next year. If he does solely like Obi and neglects the human element, he will run into trouble with both the political class and the people.

If he emphasizes only on the human element he will likely end up like a certain Chinwoke Mbadinuju, a very good man who was overwhelmed by those he empowered.

It is especially important for Soludo not to ignore or jettison the political class as they are still the people he will run to in order to succeed in his second term bid.

Soludo, we all know, is a name that rings a bell across Nigeria and beyond, but without the structure built by APGA and Obiano, he would not have made it easily. Thus this is the time for him to build his own structure and he can only do that by not being aloof to people.

This is important because of the perception (right or wrong) of him by many people who fear that he will not look the way of people when he assumes office.

Above all, those whose briefs have to do with things that happen in the state must also reside in the state. You cannot be Sokoto doing your business and getting alert for a job you know nothing about here. Anything short of these will amount to a waste of public funds and has nothing to do with kindness. It will actually amount to a promotion of laziness.

We don’t want a situation where hundreds will get paid every month for doing nothing visible and this is where the outgoing government had problems. In trying to be kind, Obiano became a trifle over kind and his government ended up being a kind of Father Christmas as many people got paid for doing nothing.

Soludo must avoid this temptation. Yes, it is a temptation because many will applaud him for ”being a good man” in so far as they benefit from his government. They will be quick, however, to berate him for being wicked if he decides to ”block leakages”. He should therefore devise a way of delicately balancing this little problem.

It is not going to be such an easy task, but then, governing a state as complex as Anambra is never going to be a piece of cake.