Last Friday, June 24, the Anambra State governor, Prof Chukwuma Soludo, marked his one hundred days in office after he was sworn in on March 17 this year. It has no doubt been a hundred days of turbulence, with the new government fighting to bring sanity back to the state which has been engulfed by insecurity it inherited from the last government. To this end, it will be not just too early to judge the government but even harsh to do so.

Security of life and property is always on the top list of every government as without security nothing meaningful can be done.

Soludo is well aware of this and stated as much in his address while marking his 100 days in office.

His words, ‘We just clocked our first 100 days in office, as I and my deputy, Dr Onyekachukwu Ibezim, serve you as your governor and deputy governor.

I am not a fan of marking 100 days in office. I prefer to give you an annual report and we look forward to the first one in March next year.

The last 100 days have been very bumpy and challenging. It has been a case of so far, so bumpy, but so good. Every day we work 24 hours to ensure that we do not disappoint you. We have resolved that we must do that to make you happy and proud.

I remind everyone who wants to commiserate with me that I duly applied for this job. We have launched a campaign to restore our homeland. 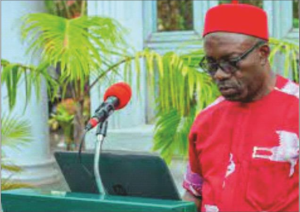 Most people can attest that the grave insecurity is gradually being contained and we remain undaunted. Even as I speak to you now, something is going on in various communities in Anambra State.

This administration is built on five pillars: our first pillar is security, law and order. We have created a new ministry, the Ministry of Homeland affairs, which has also unveiled the security and emergency crack team. We have embarked upon mobilization, sensitization and worked with clergy men and others to mobilize the people against insecurity.

The people are united in fighting against the lucrative criminal enterprise and idolatrous acts. The criminals have been exposed and our people are leading the fight and changing the narrative. We declared war on them and government is determined to deal with it.

It took years for criminality to take root, and we have a long way to ensure we stop it. No bushes, forest or home will accommodate criminals in Anambra.’

From the governor’s speech, it is clear that security has been his focus and we agree with him totally. Once security is fixed, other things will naturally follow. We therefore urge the citizenry to exercise patience and give every support to the new administration. We believe that Soludo will come good as long as he listens to the pulse of the people and takes criticism in good faith.

No matter how well he does eventually, criticism will come and it is his ability to cope with such that will determine how far he will go but we also appeal that such criticisms should always be constructive and not aimed to malign or destroy.

We will however suggest that after the rains, the issue of bad roads should be addressed as it is a sector that has completely collapsed in the state. We are happy that he has also acknowledged this and has promised to tackle it after the rains.

For now we should all join hands in making Anambra better. The state belongs to us all and together we shall triumph.