The thugs, five men in Army uniform, and over 35 labourers, said to be armed with dangerous weapons, beat up 70 year-old Chief Nweke Chieme and his sick wife, threw them out of their sleeping beds and vandalised the 6-bedroom flat bungalow 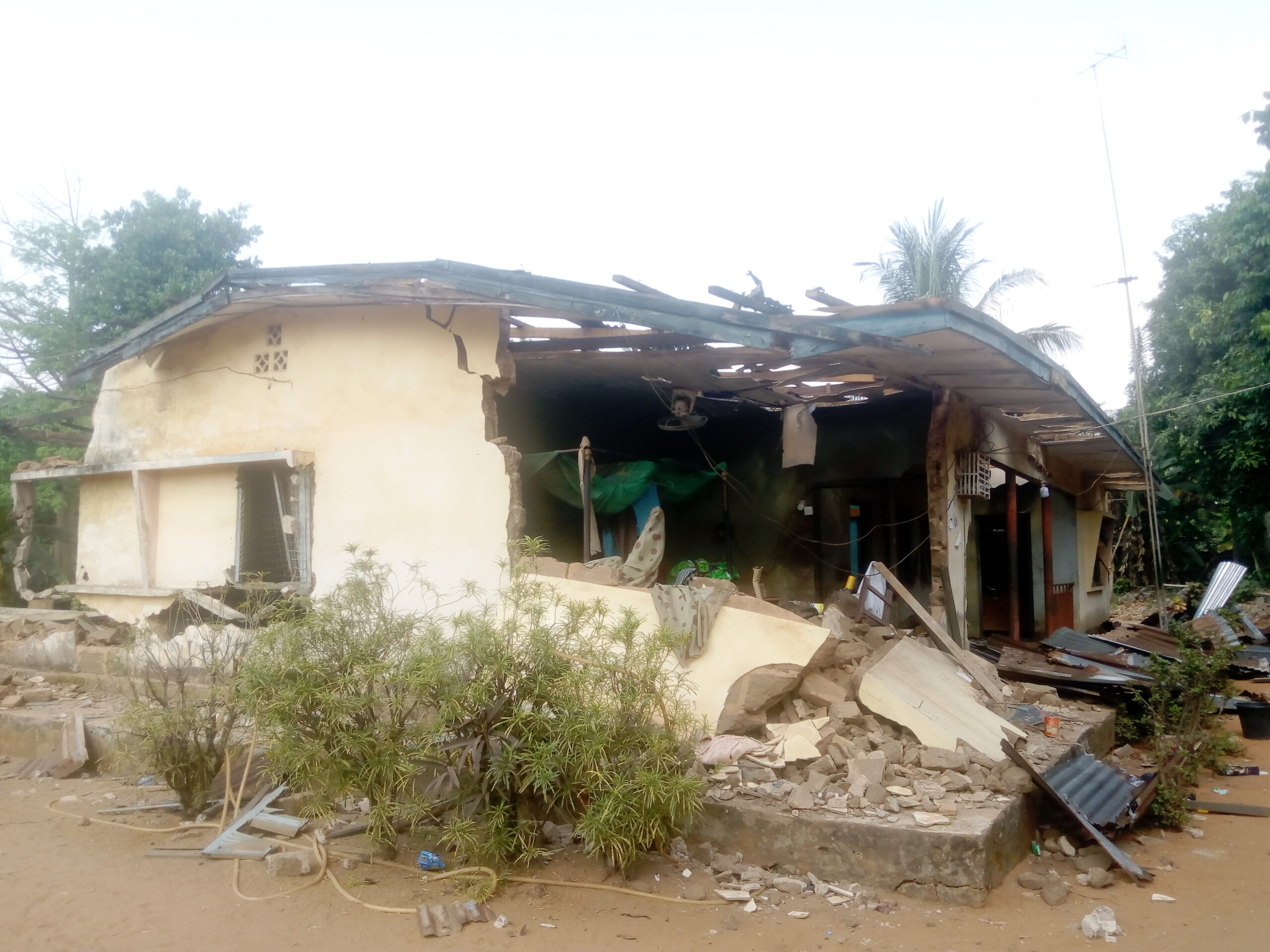 Fides gathered that the 70 year old has been made homeless by his brother, Stephen Ngenegbo Chieme, over family disputes

Recounting the ordeal, the daughter of the affected man, Nneka Chieme, told Fides how about five soldiers and over thirty labourers stormed their home in the early hours of Friday and demolished their house, molested their parents on the command of their uncle, Stephen Ngenegbo.

‘Before I could say jack, the soldiers had gripped me, ceased my phone and commanded me to keep quiet while they moved straight to my parents, kicked and slapped them, dislocated my brother’s knee with the butt of their gun and pushed my parents out of the room, while they dismantled our house,’ Chieme said.

‘The most pathetic, is that the soldiers blocked every entrance to our compound, so nobody came to our aid till they finished,’ she lamented.

Meanwhile, a maternal uncle to the brother, Mr Christopher Nwegwe, in an eye witness account, said that the most annoying part of it was how the Nibo Vigilante group came and never stopped the labourers but went on pleading with Ngenegbo.

Mr Nwegwe described the act as taboo, one that was never heard in Nibo Community, while he appealed to the Anambra State Government to come to the aid of Michael Chieme.

Another eyewitness who pleaded anonymity, narrated how the soldiers closed the whole street and stopped every movement in that neighborhood until they finished their operation.

She also said that all her life, she never experienced such inhuman treated meted out on any family.

Also, the son of the affected man, Mr Ejiofor Chieme, recalled how the case had been tried by different courts and his father emerged victorious in all.

‘This house was shared among them by their father. My uncle in 2014 filed a case concerning this building but the court ruling was in my father’s favour’

‘The painful aspect is that they slapped my mother who had been down with stroke for years, and as I am speaking with you, my parents are in the hospital, critically down,’ he said.

Mr Ejiofor appealed to human rights groups, the Anambra State Government, non-governmental organizations, and well-meaning Nigerians to help get Justice for his parents.

However, reacting to the allegations, the accused, Mr Stephen Ngenegbo Chieme, refuted the claims of His brother, stating that the house in contest was built single-handedly by him in the early 70s.

Mr Ngenegbo Chieme also said that according to the customs and traditions of Nibo Community, he was the bona fide owner of the compound and it was not in contest with anybody. He said he planned to renovate the house which was at verge of dilapidation.

‘I came to the compound to only renovate my house with five labourers, quote me. I did not come with any soldiers; instead Ejiofor Chieme was the person who arrested me with soldiers and my labourers did not touch anybody. So all these things they are saying are mere lies.

‘I have not been in court with my brother concerning the ownership of the house. Instead, in 2012 they took me to a deity called ‘Haaba’ Agulu. They still have a verdict in my favour and that was what prompted me to take the decision I took,’ he stated.