The Anambra State Government, has trained over 200 youths on various trades, even as 53 of them have been provided with starter packs to commence their own businesses.

The youths were trained under the 4th batch “One Youth One Skill” empowerment programme of the government through the Ministry of Youth Empowerment and Creative Economy. 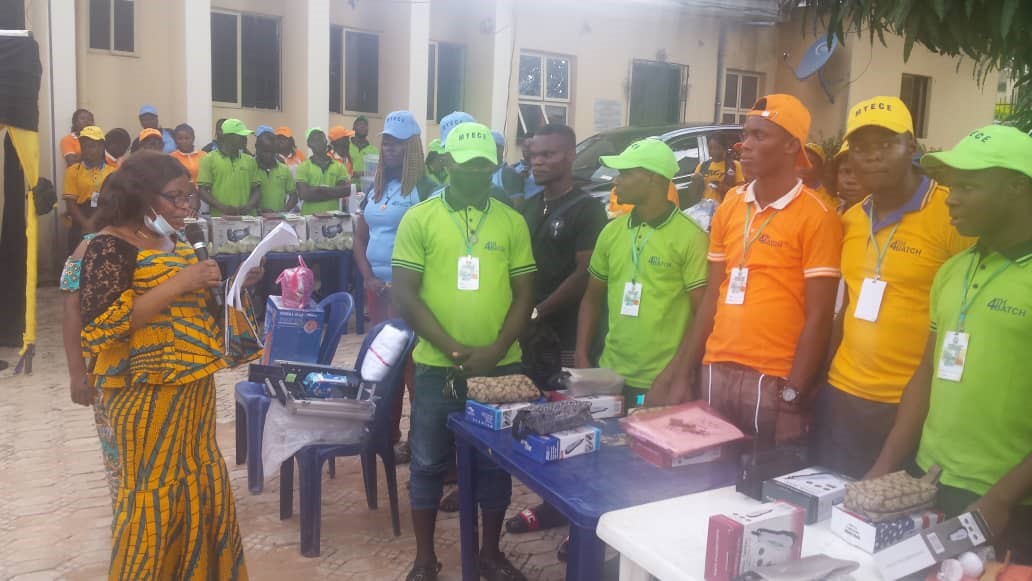 Some of the beneficiaries taking instructions from the permanent Secretary of the Ministry of Youth Empowerment and Creative Economy, Mrs Louisa Ezeanya

Three centres across the state were chosen for the intensive programme which lasted for one month on the following trades: Cosmetology, Confectioneries, Barbing, Solar Installation/CCTV, Shoe Making/Leather works, Manicure/Pedicure and Facials.

Presenting the items to the beneficiaries during the closing ceremony of the programme in Awka, Commissioner for Youth Empowerment and Creative Economy, Prof Theresa Obiekezie, said the programme was in fulfillment of government’s commitment to promote entrepreneurship.

She added that the youths were trained on the seven selected trades after which they would be issued with Trade Test certificates.

‘Trade Test certificates will be issued to all the trainees, those who got starter packs are those who performed excellently, well as examined by their coaches. We want them to immediately take off, stand on their own and train others,’ she said.

While urging those who did not benefit from the starter packs to be patient. She said government would work out ways of supporting them through the coaching and mentorship programme provided to build their capacity and sources of credit facilities.

Earlier, the Director of Youth Development in the Ministry, Mrs Chita Osili, praised the youths for being dedicated and productive during the training duration.

Some of the beneficiaries, including Emmanuel Nweze; Edwin Michael; Rosline Eze and Ernest Okafor, appreciated the state government for considering them proper to benefit from the programme, and pledged to put the equipment into good use.

The ceremony featured exhibition and inspection of various products by the graduands by the Commissioner accompanied by the Permanent Secretary in the Ministry, Mrs Louisa Ezeanya, and other dignitaries.