The continued Monday sit-at-home by people residing in the Eastern part of Nigeria in compliance to the directive issued by the Igbo agitation group, the Indigenous People of Biafra, IPOB, even after its suspension, has been described as a colossal waste of intellectual, material and other financial resources by the Auxiliary Bishop of the Catholic Diocese of Awka, Most Rev. Jonas Benson Okoye.

Following the arrest and detention of IPOB leader, Nnamdi Kanu, his group had initially declared every Monday as a day in which every Igbo person should sit at home in protest against the fate of the IPOB leader. 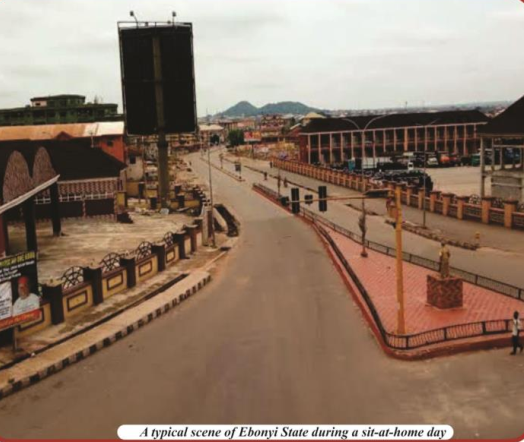 After the first Monday in which it was observed, and following criticisms trailing it as a result of the violence visited on those who failed to observe it; as well as outrage in some quarters over the missing of NECO exams by students, the leadership of IPOB had announced the suspension of the earlier directive. It said the sit-at-homes would only be observed on the days their leader would appear in court.

But despite the suspension, many had continued to stay at home on Mondays, mostly out of fear of molestation by members of IPOB.

Bishop Okoye who spoke to Fides in an exclusive interview with Fides last Sunday, August 29, at St. Anthony’s Catholic Church, Ifite Awka, during his pastoral visit to the parish, has however frowned on the development, noting that sitting at home every Monday would only promote a culture of laziness, with some individuals cashing in on that to relax and waste their productive time.

The Catholic prelate acknowledged that the cause which the IPOB group fought together with the Ohaneze Ndigbo, Catholic bishops and priests, was merely to promote justice and fairness, especially to marginalized people.

He regretted that the manner  which the IPOB had employed in seeking for justice and fairness was detrimental to the growth of people who resided and earned their livelihood in the east. The bishop noted that sitting at home benefited no one as it only added to wasted hours.

He noted that people in Eastern Nigeria were subsistent earners and thus it would be unfair that people were kept at home due to the fear of the unknown, especially those associated with losing their wares and lives in the course of earning a living.

Bishop Okoye who wondered why people were frightened of going out on Mondays even after the order had been lifted, said  some lazy people were now using it as an excuse to avoid going to work.

He therefore urged people to go back to work and allow major stakeholders, including Catholic Bishops, who, he said, were greatly concerned about the welfare of the masses, to continue with the fight.

He said it entailed drastic negotiation and dialoguing with those at the helm of authority for better welfare and good governance of the people.

He urged government and security agencies to encourage people to go about their normal daily activities on Mondays by adopting ways of dousing people’s fear.

Bishop Okoye said that concerted effort was needed to ensure that banks began normal operations on Mondays in order to encourage others to resume their normal duties on Mondays.