Early within the past week the Anambra State Government released a press statement directing the state’s civil servants to fully resume normal work following the directive by the Indigenous People of Biafra, IPOB, that the sit-at-home strike had been suspended.

Earlier directives by the government had met with little success as people still harboured fear that they would be attacked by hoodlums if they came out for business. But following marked improvement in business activities over the last two Mondays, and following also the continued announcement by IPOB that the Monday sit-at-home directive remained suspended, the Anambra State Government, through the Commissioner for Information and Public Enlightenment, directed all public servants and the people of the state to report to their duty posts last Monday. But the directive only recorded partial success.

The banks remained closed and while only workers at Government House responded quite well, those at the secretariat did not, while the bank there did not operate, at least initially.

Outside, commercial banks did not also open and this kept customers stranded. At the biggest market in West Africa, the Onitsha Main Market, there was no sign of life as the traders stayed home. 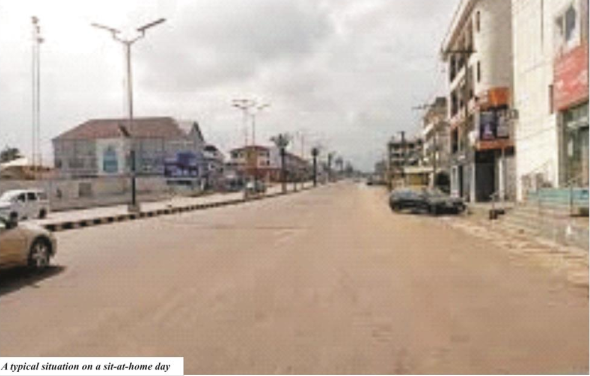 One of the traders told me over the phone about a rumour that the hoodlums enforcing sit-at-home had warned the chairman of Onitsha Main Market against opening the market, lest he became a target of attack. This caused the market to be shut last Monday as many of the traders were scared of coming out.

It is this element of fear that has sustained this sit-at-home up to this point across the Southeast Zone, rather than people not being willing to go out. The average Igbo man does not play with his business or source of livelihood and even though some supported and still support the idea behind the sit-a-home, they will sooner opt out and embrace their business than continue with what obviously is not bringing food to their table.

But then the Igbo man also values his life above all else. That is why despite government’s assurances and the announcements by IPOB of the suspension of the weekly Monday lockdown, many people still refuse to come out.

And by ignoring the state government’s directive last Monday the people have also shown that the real power resides with IPOB, even with its many fragmentations now.

So why is government not getting it right? I think I will blame government for paying mere lip service to its own directives. For how could government ask people to come out without making adequate provisions for their security?

While Awka remains the safest city at the moment, areas like Onitsha, Ihiala and Ekwulobia, are not. They remain hotbeds of attacks by the hoodlums and nothing concrete is apparently being done by government about it.

Last Monday, even the civil servants’ buses conveying them to and from work from the various zones of the state did not operate. So how did government expect civil servants living in those hotbeds to come out when there were skeletal operations by commercial bus drivers?

One would have expected government to meet with all the stakeholders to provide fool proof arrangements to ensure the success of its directive to guard against further erosion of belief in government by the people.

The situation at Onitsha Main Market is particularly dire as much revenue is being lost by the state every Monday. The matter can become worse because if this continues, those coming to Onitsha for business from outside the state may begin to look for other markets and when they find them, Onitsha Main Market will diminish in influence. If that happens, it will be as painful as the loss of a dear one. I’m sure that’s not what we want.

As for the IPOB group, it is not enough to tell the people to apprehend those insisting on lockdown. This is a monster created by IPOB and I expect them to tackle it headlong; after all, they still have their Eastern Security Network, ESN, which they told us then were to be used in protecting Igbo Land. At the moment, Igbo Land needs to be protected by those ”defying” IPOB’s order for people to come out. The ESN should not wait to be asked to go flush out these people as it is a great test of their love for their father land.

Has our space been taken over by Touts?

There are touts everywhere you find your way these days in the major cities of Anambra State but none worse than what one sees in Onitsha. It is a place where you are extorted almost at every pole. Those who buy items in the commercial city are currently going through a torrid time.

Once the commercial vehicle you hire turns a bend, you find some touts brandishing various tickets at you for you to pay up. There is no use arguing as they may turn tough. And the most bizarre thing is that most times you find the police not far away and they look the other way.

Many times the Anambra State Government had warned against such in Onitsha and other places but such warning always fell on deaf ears. This has led some people, including yours truly, to begin to surmise that those touts are actually working in cahoots with some state government agents who provide them cover.

This suspicion is based on the fact that those touts are always seen at same spots every day strutting their stuff without molestation. Most of them do not allow ”offenders” to pay into the bank but will demand downright cash payment. This just about proves their fakeness.

It is indeed very probable that some agents of the state government are seeing what is happening as what I’ll call a last bazaar; given that the tenure of the government is coming to an end. But to my reckoning, the tenure of this administration comes to an end on March 17 next year.

This is why they should check the activities of these elements whose actions will be used to judge the success or failure of the outgoing administration. It may seem not to matter at all for now, but a time will come when the wind will blow and certain people will regret their actions or inactions.

The governorship election in Anambra State has come and gone but the issue of security will still remain on the front burner for some time. Before the last election, the state was virtually a war zone as unknown gunmen were always battling security personnel.

This led to some people suspecting that the attacks had to do with the election as some politicians of a particular party wanted to use the situation as a decoy to foist their candidate.

I never bought this yarn as I stuck to my initial belief that the unknown gunmen were independent of politicians, especially as virtually all of the major parties fell victim to them at one time or another.

From when Prof Chukwuma Soludo, the winner of that election and candidate of the All Progressives Grand Alliance, APGA, had three of his police orderlies killed by the gunmen, to when someone was killed at the office of the All Progressives Congress, APC, during a meeting in Nnewi and when the then candidate of the People’s Democratic Party, PDP, had his driver killed, it was clear that politicians were not behind the killings.

Also when it is recalled that the killings started in Imo State where there was election and still continues even now, it will be clear that those behind it were not politicians.

While it is true that just before the election IPOB urged the citizenry in Anambra to go and vote, it may be argued that the massive deployment of security personnel proved too much for the unknown gunmen who beat a tactical retreat and declared support for the election to save face.

But whether or not this was the case, I think it will be in every law abiding citizen’s interest that security remains beefed up to keep these hoodlums in check. We cannot afford to lose the gains we have made in the war against these mindless killers. We should press home the advantage and keep it like that if we desire to avert the situation in Borno State which started like this.