Sir Alphonsus and Lady Grace Ekwunife, were on Sunday, December 27, 2020, feted by their children and well-wishers, as they marked the 50th anniversary of their wedding; a development which explains that the duo got married in 1970. 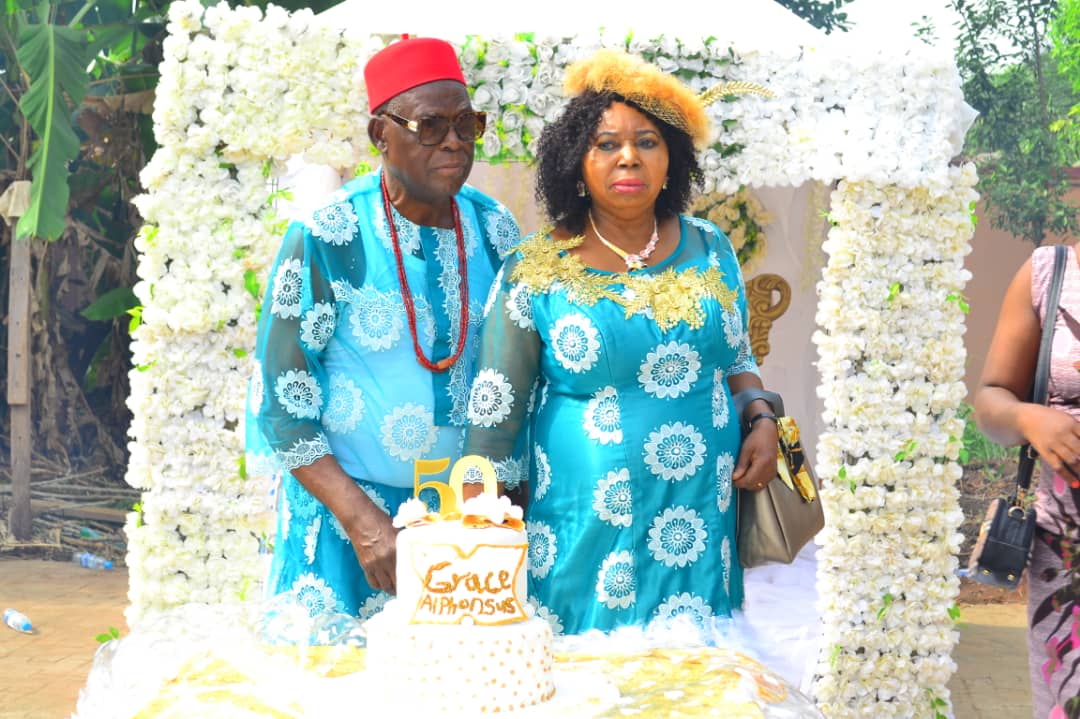 At a concelebrated Mass held at St Joseph Catholic Church, Ebenebe, officiated by Rev. Fr Anthony Mbonu, the parish priest and guests were drawn from far and wide to witness the renewal of marital vows between the celebrants after five decades.

Speaking during his homily at the Mass which coincided with the feast of the Holy Family, Rev. Fr Mbonu said it was necessary for the family of God to come together to worship Him, owing to the providence of family in which He put everyone. He argued that all theories of evolution had limitations to the explanation of human existence, adding that only the Bible has the correct account of creation and family upbringing.

‘God divinely instituted families: created heaven, earth and every other thing, as well as, humans, whom He put into families, and gave them wisdom and marriage,’ he explained.

The parish priest who noted that the day’s feast was about the Holy Family of Joseph and Mary, through which other families of Christ came forth, added that marriage was created by God for one man and a wife, as against polygamy or polyandry.

‘Replete in the scriptures,’ Fr Mbonu explained, ‘old and new testaments, are good and bad families,’ noting that children were groomed through the things they emulated from their parents, and urged parents to be good influence on their children.

In a chat with the press, the first son of Sir/Lady Ekwunife, Chief Pharm. Kingsley Ekwunife, explained that his parents had lived lives of truth, fairness and justice describing such as worthy of emulation by every young person, and added that such live attracted the grace of God.

Chief Ekwunife took a swipe on the practice of celebrating people at death, and said he opted to celebrate his parents who had lived together for half a century, when they would witness and appreciate it.

Meanwhile, Sir/Lady Ekwunife, whose children beseeched God to keep them for another celebration in the next fifty years, wedded on the 16th day of September, 1970.