The Ezisi family of Nkitaku Village, Agulu, in Anaocha LGA of Anambra State, has laid their late 92-year-old patriarch to rest. The funeral ceremony started with a vigil Mass/wake at their Nkitaku home on Thursday 15 September 2022.

The concelebrated burial Mass with the newly ordained cardinal, His Eminence, Peter Cardinal Ebere Okpaleke, as the chief celebrant, was held at Madonna Assumpta Catholic Church, Agulu, on Friday, 16 September 2022 while the interment followed in his compound. 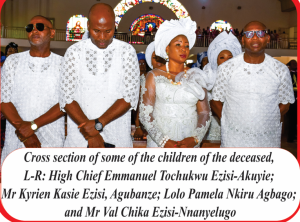 Before his death, he enjoyed a teaching career in schools such as St. Charles College, Onitsha; St. Peter’s School, Abor; St. Anthony’s School, Iva Valley, Enugu; and St Patrick’s School, Awka, among others, before venturing into business in 1985.

In 1987, he was elected as the councillor representing Agulu Ward II in the then Njikoka Local Government Council. He was well-known for his philanthropy, administrative skills, outstanding leadership qualities, uprightness, and love of God.

The homilist, at the Vigil Mass, Rev. Fr. Hillary Ben Ezenwa, the Judicial Vicar of Awka Diocese, admonished all Christians to lead holy lives and to continuously support the work of God.

With reference to the Feast of Our Lady of Sorrows commemorated that day, he highlighted the Seven Sorrows of the Virgin Mary while encouraging all to commit their sorrows, such as the death of loved ones, to God like Mary did.

While thanking God for the long, purposeful life the late patriarch had lived, Fr Ezenwa expressed gratitude to the Ezisi family for constantly celebrating their father during his lifetime and prayed that his soul found rest in the Lord’s bosom.

The Catholic Bishop of Awka Diocese, Most Rev. Paulinus Ezeokafor, in his homily at the burial Mass, stressed the need to constantly pray for the dead, adding that it was a spiritual work of mercy. He urged all to always have the life hereafter in mind, while noting the inevitability of death. He encouraged all to desist from materialism while preparing for eternity.

The Bishop thanked God for the life of the late Sir Ezisi, who, he said, had well exceeded the biblical life expectancy of 70 and 80 for the strong. He described the late Knight as full of life even in old age; even as he also appreciated the family for adequately catering for him till his death.

On the issue of voting, the prelate implored all to perform their civic duties and vote wisely for healthy candidates with excellent track records. He decried the buying and selling of votes and pointed out that the growth and development of the country was a collective responsibility. 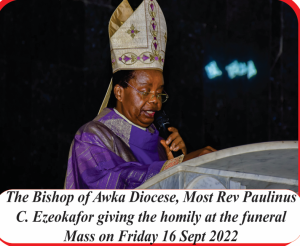 He appreciated the presence of all at the Holy Mass, even as he continued to pray for the repose of the soul of the late Sir Ezisi.

Mr. Val Chika Ezisi, on behalf of the Ezisi family, expressed gratitude to everyone for their unalloyed support and prayers following the loss of their father.

The funeral ceremony was well attended by several dignitaries, including the former Governor of Anambra State and the Labour Party presidential candidate, Mr. Peter Obi, represented by his Special Adviser on Media, Mr. Valentine Obienyem; as well as the Knights and Ladies of St. John International. 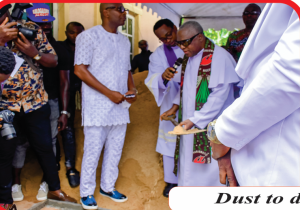 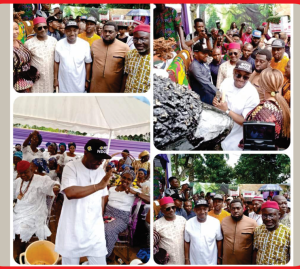