The President of Chie’mma Empowerment Foundation, a non-governmental organization working for the cause of people living with sickle cell disorder, Mrs Chinwe Nnagbo, has been delivered of a baby girl on Friday, June 18, 2021, on the eve of World Sickle Cell Day Celebration.

Nnagbo, however, demanded to be discharged from the hospital, less than 24 hours after delivery. She told Fides when contacted that because it was against the hospital’s rule, she was required to sign an undertaking.

Fides gathered that the foundation joined in the United Nation’s commemoration of the World Sickle Cell Day on the next day, Saturday, June 19, 2021, and Nnagbo was on ground at the venue of the celebration, despite having a new baby.

A source close to Nnagbo who works in a health facility wrote, ‘Congratulations, Mrs Chinwe Nnagbo, on the arrival of our baby girl,’ adding that when the Chie’mma Foundation’s President visited their facility for scan, the radiographer told her it was a girl, a development that got her smiling. 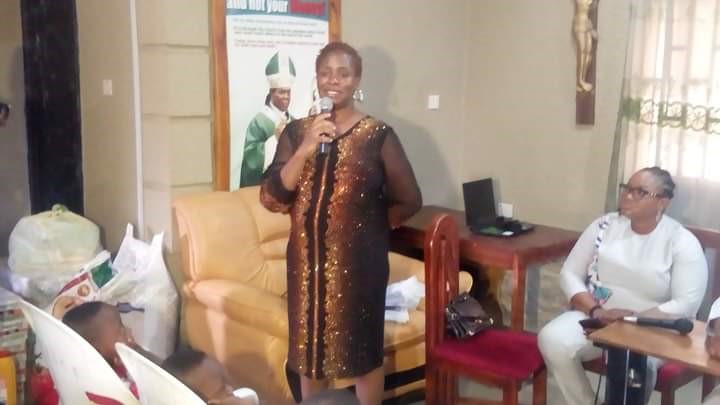 ‘She came out, took my hands and dragged me out,’ the source continued, adding that Nnagbo had asked how competent their radiographers were, promising to throw a party for staff members of the facility if she had a baby girl.

When Nnagbo was contacted by Fides, she disclosed that she was stressed out because of so much work which she had put into planning the programme of the next day, reason for which she broke down and was rushed to the hospital.

‘They found out that the fetal heart rate was high, with the baby stressed. Then, they tried to find out what the problem was and I told them I was stressed and I was going through a lot,’ Nnagbo explained.

Fides learnt she insisted to leave because she had an important event. She appreciated her husband, who, she noted, always supported her dreams of wanting the children living with sickle cell disorder to have a better lives.

‘It is not just about the sensitization; I want to make life easier for people living with sickle cell and one of them is having a Sickle Cell Centre or Sickle Cell Day Care, the way you have Ante Natal Centres,’ she explained.

Commenting further on the Sickle Cell Centre project, she said the foundation might begin building the project; a bungalow with wards for male and female adults, male and female wards for children and a blood bank, anytime soon.

Nnagbo noted that with a blood bank in place, it would be easier for donors to access and donate blood which was regularly needed by the patients, especially in cases of emergency. She added that if the government did not see it as a pressing issue, they would have no choice than to carry it out, as it would make it easy for accessing doctors; even as she disclosed that an Architect was putting up the drawing of the building which she proposed

In the light of the day’s celebration, the Manager of St Charles Medics, Awka, Mrs Nkeonyelu Obiora, urged primary schools to make children understand what genotype was and all it entailed.

She recalled how a sickle cell patient faced crisis, adding that his father was almost giving up on him.

‘And for our younger generation who think love and money conquers this, I am sorry to disappoint you, it does not play safe,’ Obiora explained.

She added that genotype test was one of the cheapest tests both in private and public health facilities, noting however that government health facilities might even charge lesser amounts for the test.