It was confusion and frustration in Awka capital, Thursday, when a sudden strike action by commercial shuttle bus drivers left commuters stranded, even as their tricycle (keke) counterparts protested alleged harassment by those they described as masked security officials, reports Jude Atupulazi.

Commuters were seen stranded at different bus stands as shuttle drivers reportedly embarked on a strike action. The suddenness of the action caught many, including civil servants and traders, off balance as many had to trek to their offices and shops.

The action of the shuttle bus drivers, Fides learnt, was in protest against the harmonized tax by the Anambra State Government.

It will be recalled that in an effort to reduce illegal tax collection and establish a uniform system of payment for commercial motorists in the state, the Anambra State Government came up with a new regime of harmonized levies for commercial drivers. 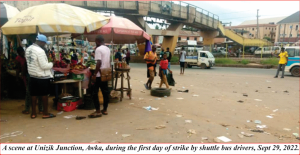 Some weeks ago, the shuttle drivers had protested the amount issued by the state government, prompting them to embark on a strike action last Thursday, with commercial shuttles buses disappearing from the roads.

One of the aggrieved drivers said their action was aimed at compelling the state government to come to their aid and reduce the amount, which, he claimed, was too much for them.

‘Many of us have families and are driving their shuttles on hire purchase,’ he bemoaned, while noting that they expected the state government to make the amount very cheap and easier for them to pay.

Just as the shuttle drivers were protesting, their counterparts in the tricycle business, otherwise known as keke drivers, were also doing their own and were even joined by some commuters and vendors.

They expressed their unhappiness over what they termed the constant harassment by security agencies comprising Ocha Brigade and  Anambra Vigilante Service.

An eye witness explained that the said officials had come to enforce the mandatory fee of N15, 000 on commuters. The keke operators expressed their pains by displaying anti-government placards depicting their difficulties arising from the new regime of fees. Some of their members who tried to pick passengers were chased away and those who managed to pick had their passengers ordered out.

A popular commuter popularly called Ajebo, described the timing of the enforcement as sudden and hurtful and accused the government of putting so much pain and hardship on them.

‘I am driving a hire purchase vehicle and I am responsible for every cost incurred. The amount of the taxing is too much,’ he lamented.

Calls put through to the Commissioner for Transport, Hon Pat Igwebuike, to get his reaction were unanswered; just as efforts to reach the head of AVS were futile.