Wikipedia describes transformational leadership as a theory of leadership where a leader works with teams or followers beyond their immediate self interests, to identify needed change, thus, creating a vision to guide the change through influence, inspiration, among others.

Therefore, a transformational leader serves as a role model who inspires confidence in his team, he is proactive and leads from the front.

That is the man, Major General Shuaibu Ibrahim, the 18th Chief Executive of the National Youth Sevice Corps who assumed duty as Director-General of the foremost youth — mobilisation agency in the country on 10th May, 2019.

He came prepared for the task ahead, therefore wasted no time in rolling out a five – point agenda that gave a clearcut direction on the perspective of his administration in May, 2019.

Ibrahim in unmistakable terms demystiied the airs, opulence and all the glamour associated with high office in Nigeria, making himself accessible and available, not only to NYSC staff members and Corps Members whom he prioritised their welfare, but to the media and other stakeholders as well.

Interestingly, before the drop of the hat, he has given out his personal telephone number on request, and personally picks his calls.

He is a man that I have known and observed in the past twenty — six years, and worked closely with him in the last three years. 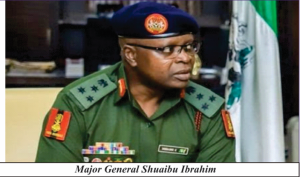 He has never ceased to amaze me at the amount of energy and passion he puts in the discharge of his duties. Gen Shuaibu Ibrahim is a transformational leader that is proactively proactive and consistently consistent, all shrouded in humility in his interpersonal relationships, that sometimes make people to ask if he is truly a military man, for the military are known in so many climes for quick temper and authoritarianism, resulting from their hard training.

One of the critical issues that he did on assumption of office was to bring sanity to the NYSC mobilisation process which hitherto suffered so much assault from unscrupulous officers in some Corps Producing Institutions, particularly those in the West Africa sub-region who fraudulently forward names of unqualified people for mobilisation.

He called a meeting of the Registrars of the institutions in Abuja in a bid to get their buy — in towards sanitising the mobilisation process. That singular action yielded great dividends. Some of the unscrupulous officers were sanctioned, while some of the institutions implicated in the fraudulent practice were shutdown by their respective governments.

Internal cleansing mechanism put in place by the Scheme also saw to the dismissal of some erring officers from service.

In addition to that, he introduced the screening of foreign – trained Prospective Corps Members, particularly those that graduated from the universities in the West Africa sub-region.

Quoting the astute and pragmatic administrator, the result of the screening has “been mind-boggling. Some of the supposed graduates parading bogus degree certificates, with second class upper division could not write their names correctly, let alone make correct sentence during the screening exercise which has been institutionalised.”

The soft – looking, but no-nonsense general who loathes unpatriotic acts and circumvention of law and order vowed never to mobilise unqualified people for service.

Some of those caught parading bogus and unearned certificates have equally been prosecuted and jailed to serve as a deterrent to others.

Frighteningly, if those characters had not been detected through the doggedness of the Director-General, many of them would have found their ways to both the public and private sectors to debase the institutions.

Ibrahim believes so much in forging worthy partnerships with both public and private institutions of like minds. In particular, the robust collaboration with Nigeria Centre for Disease Control resulted in early and safe return of the Corps to the Orientation camps, under the supervision of the NCDC.

Gratifyingly, the data generated on COVID-19 tests at the Orientation camps helps the NCDC in tracking the rate of infection in the country.

He is a man that believes so much in the utilisation of Corps potentials for national development. He is detribalised, humane and blind to people’s religious persuasions.

Though a devout Muslim, he believes that true religion is the pursuit of people’s welfare and happiness; and would always speak to people about the ephemeral nature of human existence. He is always concerned with touching lives, and leaving worthy legacies for which posterity will remember him when he has gone to be with his Maker.

No wonder he has continued to pay the school fees of some less privileged students, cutting across tribe and religion, which he has done from his days as a young officer of the Education Corps.

Yes, he believes so much in the utilisation of Corps potentials for national development like I had earlier stated. This conviction prompted him to challenge the creative ingenuity of Corps Members at the outbreak of COVID-19 pandemic in Nigeria.

That challenge yielded so many inventions by the Corps Members, ranging from body temperature reading devices to automated sanitiser machines, as well as liquid soap — water — sanitiser — dispensing machines, among others.

Corps Members were amongst the first set of Nigerians to produce liquid soap, sanitiser and facemasks which were donated to Nigerians, free of charge.

He established NYSC National Troupe, revitalised NYSC Musical Band, so as to showcase the musical skills of Corps Members.

The first NYSC Film, titled: A Call To Service, featuring some Corps Members and Nollywood stars such as Pete Edochie was premiered last year. The film has introduced Corps Members with budding talents to the vast opportunities in the Nollywood industry which some of them have embraced.

Under his watch, the NYSC Farms have been resuscitated, notably: the rice farm in Kebbi State, cassava farm in Oyo State, maize farm in Bauchi State, cassava, rice and poultry farms in the FCT. Beniseed is also cultivated in the farm.

In 2021, he was able to recover 52 acres of land allocated to the NYSC Secretariat Ebonyi as farmland by the State Government. The land was left uncultivated for so many years, resulting in the State taking back the land.

Through his doggedness, the land was given back to the Scheme. It is now a large rice farm which was cultivated in partnership with NALDA. Plans have also reached advanced stage to secure land in Bayelsa State for cultivation.

The same applies to other NYSC ventures such as the water factory, bakery and garment industries, all of which have been revitalised and are operated by Corps Members under the supervision of relevant NYSC staff members.

Recently, the Executive Governor of Nasarawa State commissioned another NYSC water factory in Keffi, as well as NYSC garment factory, built in collaboration with the private sector. These ventures generate revenue which are paid into government coffers.

Indeed, I was amazed when the Director-General announced that the Scheme for the first time in history contributed about Two Hundred and Eighty- One Naira to the national coffers from internally – generated funds which is unprecedented in the annals of the NYSC. As at date, over one billion Naira has been generated and paid into government coffers by the Scheme.

The Director-General has pioneered the construction of an ICT centre which according a senior member of staff of the institution thought was not possible. From every indication, the edifice will be commissioned within the year.

The General, a Fellow, Historical Society of Nigeria and Member Teachers Registration Council of Nigeria has equally established NYSC Museum which is named: NYSC Museum of Dynamic History which, I stand to be corrected is the biggest museum in Abuja. The museum is a centre of learning.

To give the Scheme a strong voice in the media space, he established NYSC Radio and Television Stations which were commissioned in April this year by the former Head of State, Gen Yakubu Gowon. The television transmits on TStv Channel 365 and the radio station on 88.3 FM.

The Director-General ensured an upward review of Corps Members allowances by the Federal Government which is a great morale booster to Corps Members, in addition to the decentralisation of NYSC Administration through the establishment of NYSC Area Offices, domiciled in each of the six geopolitical zones of the country, manned by substantive directors.

The Area Òffices have brought administration closer to the grassroots, while also opening up space for the career advancement of staff.

In January this year, NYSC mega printing press, Kaduna was commissioned. The press prints both for the Scheme and outsiders at a competitive cost. It equally serves as a training ground for Corps Members that desire to go into printing business at the end of service.

There is no gainsaying the fact that capturing all that the DG has achieved within three years in this single write-up would seem like a fruitless effort at reciting an unending litany.

I am not hesitant to posit without equivocation that he is a shinning star in the present Administration of President Muhammadu Buhari. He has reinvigorated the National Youth Sevice Corps, making Corps Members and staff welfare key priority, making the Corps central to national development and stability.

To further prioritise Corps Members’ welfare, especially in the area of empowerment, under the platform of Skill Acquisition and Entrepreneurship Development programme, he canvassed the establishment of skill acquisition centres in six of the geopolitical zones. Some have been commissioned.

He has championed the establishment of National Youth Service Corps Trust Fund ( NYSCTF) which promises to be a game changer for the Corps.

The fund when established will not only address the infrastructural deficits of the Scheme as explained by the DG, but will be a pool of funds to be advanced to willing Corps Members to pursue their skill acquisition initiatives.

The benefits derivable from this proposed trust fund cannot be over-emphasised. When approved and implemented, it will lift millions of Nigerians, especially the youths out of poverty.

I feel that there will not be hesitancy by both the Executive and Legislative arms of Government in passing the bill into law in order to achieve the lofty dreams of the DG.

At this point, I am persuaded to enjoin you to please, tune to NTA International, Channel 251 every Wednesday at 7.30 pm and see the wonders NYSC has been doing in the area of youth empowerment, under the skill acquisition programme, national unity and integration. It is an interesting documentary programme which should be a must watch for every patriotic Nigerian.

These achievements as earlier captured are by no means exhaustive of his contributions in furthering the course of the National Youth Service Corps which is a pivot of national unity, national integration and youth development.

He has within three years transformed the Corps so much so that whoever that comes after him when he concludes his tour duty will find very big shoes left behind.

The National Directorate Headquarters of the Scheme in Abuja has been given a face-lift which makes it so befitting and great morale booster for staff.

Doubtlessly, at the end of his tenure of office in the Scheme, like Julius Caesar said in a letter to the Roman Senate around 47 BC after he had achieved a victory in a short war against the Pharnaces 1 at the battle of Zela as recorded by Wikipedia: Veni Vidi Vici, translated: I came I saw I conquered. He has done very well for the NYSC in three years of his purposeful leadership.

Like the youngsters would say, let us give three big gbosas to Maj Gen Shuaibu Ibrahim.