This is just as a former presidential adviser to Dr Goodluck Jonathan, Senator Ndi Obi, who is the chairman of the Presidential Campaign Council of PDP, said it was time for all members of the PDP in Anambra State to make sacrifices to save the country.

Okonkwo and Obi stated this on Tuesday, during the inauguration of the Anambra State Chapter of Atiku/Okowa Presidential Campaign Council in Awka.

Okonkwo in his acceptance speech charged all members of the council not to fear because two other Anambra sons were contesting for the presidency, but added that only patience and strategic planning could help the Igbo to attain the presidency of the country. 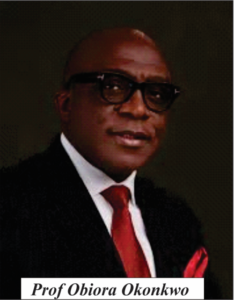 He said: ‘This journey is important and you have all taken an oath. Sentiments, anger do not give results; it is calculation and patience that makes one victorious. Any decision taken today may look justifiable, but we may regret it later.

‘You have no need to fear anybody; this state belongs to all of us. Your party is an institution, so why should you fear others because other parties have presidential candidates from Anambra?

‘I accepted to be the Director General of Atiku/Okowa Presidential Campaign Council because I have confidence in Atiku and his ability to deliver on his mandate.

Atiku will restructure Nigeria and if he does, our problem has been solved 50 percent.

‘I’m talking not as one who has benefited from the system, but an independent, hard working Igbo man. We need a man who knows the problem and ready to do all without fear to salvage Nigeria.

‘No one in Africa has done more intervention than Atiku, but he is humble and loyal, and does not even defend himself in the face of negative attacks. Every vote matters in this election, and we are going to work aggressively to help Atiku Abubakar and PDP to win election.’

Also, the chairman of the state chapter of the campaign council, Senator Ndi Obi, in his own speech said it was time for members of the PDP in Anambra State to make sacrifices that would move the country forward, promising not to let the party down, while charging every member to deliver their polling booth.

‘This is a time for sacrifice. Our party is on the opposition and whatever we have to use to deliver the nation must be used to deliver it. Let no one deceive you; Anambra is PDP and in February I am sure we shall prove that we are the party on ground.

Do all you can to make the party proud,’ he said, noting that Atiku was not difficult to market in Igbo Land, having earlier chosen Peter Obi as his running mate and now had chosen Ifeanyi Okowa. He said both choices showed Atiku’s confidence in Igbo people.

Fides reports that the party began the gathering with a large procession around the state capital, with the event attended by several big wig politicians, including Senator Uche Ekwunife; Dan Ulasi; Felix Oli; Iyom Josephine Anenih and many others.