The Parish Priest of Holy Family Catholic Parish, Agulu, Anaocha LGA, Anambra State, Rev Fr Hyacinth Anaekee has advocated for what he described as absolute self-giving in the priestly vocation among the priests.

Rev Fr Anaekee, who made the call in his homily of the concelebrated Thanksgiving Mass to mark the Priestly Silver Jubilee Anniversary of the Dean of Adazi Deanery, Very Rev Fr Dr Anthony Maduakonam Anike, at St Andrew’s Parish, Adazi-Nnukwu on Thursday, January 6, noted that such absolute self-giving was necessary on the part of every priest so as to enable their vocation to reflect the true spirit of priesthood.

Pointing out that the gift of self would not come to fulfilment if it stopped at sacrifice, the homilist called for that docility and maturity which he said validated priestly anniversary. He stressed the need for priestly anniversaries to be the types that reflected the priesthood of Christ. 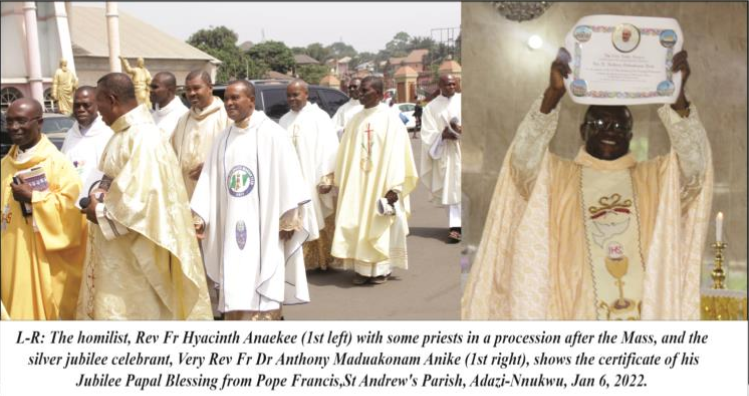 Rev Fr Anaekee described a Catholic priest as a minister of God who represented Jesus Christ, and as such should be respected by all.

He advised against occasions where some siblings of priests exploited the priests, and turned them into bread winners of the families, and as such became dependent on the priests. He explained that such was not the mind of Christ for priests.

Fr Anaekee prayed for the grace of God that would enable priests to continuously spend their lives in accordance with the guidance of the Holy Spirit and in the end enjoy lasting everlasting happiness in heaven.

The 2022 Silver Jubilee Anniversary which featured presentation and launch of a book; ”Memoirs and Mission to Diocese of Kano-Nigeria”, and was authored by the jubilarian, was graced by many priests and religious from Nigeria and beyond, as well as other dignitaries from all walks of life.