See Why I Consider the COVID Business in Nigeria as One Big Scam?

Make no mistake about it. The coronavirus is not a phantom disease. It is as real as you who are reading this. It is a disease that has wreaked havoc in temperate climes and still doing so. But here in Africa, it has somehow been unable to replicate its destructive feat in Europe, Asia and America, its major theatres.

What then is stopping it from ravaging the African continent as it has been doing elsewhere? Is it the African gods? Is it the thick blood of Africans, if there is anything like that? Or is God protecting us because we lack the know-how to take care of ourselves? Is it because of our climate? Indeed, this last factor, it is generally believed, may have been responsible for the low numbers in these parts. 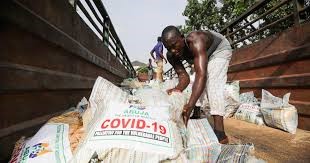 When one considers the abysmal level of COVID-19 compliance in Nigeria, one is bound to agree that we are indeed lucky and that we actually have a natural immunity that wards off the worst of the disease. A trip to any of our markets will reveal mammoth crowds of people jostling for space and doing business. Yet, there has been no explosion of the disease; or rather, people have not been dying as earlier feared.

Indeed, given the numbers of new infections daily reeled out by the Nigerian authorities, one would not have been surprised to see communities burying many people, at least on a weekly basis, or streets in the townships taking people home for burial regularly. But in communities, life has been going on normally, just as in many township streets. So how come the high numbers of new infections are yet to be justified by the number of our dead?

Whatever or whoever it is that has been protecting us from the worst of this killer virus, I remain thankful and happy; very very happy.

But like most things in Nigeria, some smart Alecks are reaping from this situation and robbing the nation blind. To sustain this robbery, they reel out figures on a daily basis that leave rooms for doubt. I’ve already explained why these figures don’t seem realistic, given the situation on ground.

Now, the bubble seems to have burst with the disclosure by Osagie Ehanire, the Minister of Health, that the federal government needed about N400 billion for COVID-19 vaccines. N400b!!!

According to Ehanire, N400 billion would be required to vaccinate 70 percent of Nigeria’s over 200 million population, at $8 per person.

But thank God for Peter Obi, former governor of Anambra, who said that Nigeria did not need more than N150 billion to procure COVID-19 vaccines. He has even volunteered to buy the vaccines for the Nigerian government for that N150b.

Commenting on the issue when he featured on ARISE Television only last Tuesday, Obi said there were issues of transparency regarding the procurement of vaccines.

According to him, Nigeria would not have needed to spend so much in procuring vaccines if its National Vaccine Production Facility was operational.

Hear him, ‘The issue of vaccine is one that I feel a sense of pain. Nigeria as a country, in 1940 established what we called National Vaccine Production Facility domiciled in Yaba, and that was able to produce virtually all the vaccines we used in the days of smallpox and yellow fever. That facility was shut down in 1991 to be refurbished and upgraded, there was nothing wrong with it.

‘And till today that has been the case deliberately so that people can import vaccines and sell to the government.

‘Now I hear that we are looking for N400bn. Well, I am at loss. Our budget this year for health is N547bn. I don’t know if they are going to take this vaccine procurement from it, because if they do, we are left with N147bn.

‘For the vaccine procurement also, we need to have transparency in the procurement. Today, vaccine in India costs between $2. 25 cents to $3. That is an average of $2.75 and if you say you are going to use N400 billion, that is about $1bn. If you divide $1bn by $2.75cents each, that is about 350 million doses which is far in excess of what we need,’ Obi explained.

Now we can all see what some people mean when they say that the COVID thing in our country has become a booming business for some people in government. These are same people who collected monies and materials in the form of donations to COVID from individuals, groups and corporate bodies. Yet when you go to the supposed centres you see nothing and we know also that some people have died from lack of these facilities. So what has been happening to all the monies donated by people and groups?

Again, supposedly because of COVID, schools in Nigeria have virtually lost an entire academic session. While they were shut, markets and other places had been operating at full capacity. In many of the markets, despite government’s directives that people must wear their face masks, only about half the population adhere to it. But still, schools where it is easy to ensure compliance to COVID-19 protocols had remained shut.

In case anyone does not know, it is easy to enforce compliance in schools because, right from the gate, students and teachers will be scrutinized and their temperatures taken, before entering the premises. Furthermore, they will be checked before they enter their offices, classrooms and hostels; while they are also made to wash their hands.

So if it is this easy to ensure compliance in schools, why had schools remained shut for such a long time while markets and offices boomed and blossomed? Such action could only come when those who do not value education manage our education.

While they do not care if our education suffers, they care about how much they will make from the COVID business and that is too bad. I have always said that if our government at all levels really want this COVID thing to evaporate, they should start enlightening people on other preventive measures. One of them is mounting a large scale enlightenment campaign for people to start doing hot water inhalation, at least twice a day. It costs nothing but is extremely effective.

Indeed, if everyone begins to do this, there will soon be no talk of COVID-19 in the country as the virus does not survive in hot temperatures, a chief reason why it has not been very devastating in our clime.

If we all begin to inhale hot water in the mornings and evenings, there will be no need to spend N400b on the acquisition of vaccines. Rather, we will use the money to address other critical areas of concern and God knows they are many.

This is however a country of mindless rogues with a single-minded devotion to emptying the coffers of the nation. May God save us from such people.

It is no more news that the Indigenous people of Biafra, IPOB, has set up a security outfit known as Eastern Security Network. The job of this outfit is mainly to protect the east from the menace of Fulani herdsmen. Already this group has begun work in some parts of the east.

Recently we all saw a video clip of where they were chasing some Fulani people away from an eastern community, accusing them of plundering the land of their host community.

Many have argued as to the propriety or otherwise of this outfit. Some believe it was confrontational to form such by people who are not part of the government, especially when there was no agreement for such to be formed. I agree. But then, what have the eastern governors done to reassure the people of their security?

After the governments of the west formed their own security outfit called Amotekun, their eastern counterparts made a show of forming theirs. But, alas, many months after, nothing is being heard or said about it. While this silence exists, the killer herdsmen have been riding rough shod on the people of the east; kidnapping, raping and killing our people.

Was it then any surprise that Nnamdi Kanu, the IPOB leader, cashed in on the leadership lacuna to form his own security outfit? Indeed, our governors have failed us in this respect. What they have been doing is mere talk, with some telling us that we live in the safest state while our people continue to be kidnapped.

I suggest that since our governors are clueless about forming their own security outfits, they should engage the IPOB on dialogue, same way some leaders in the north are engaging on dialogue with the terrorists. Our governors can leverage on what Kanu has put on ground to form a strong local security outfit that will serve the interests of the Igbo Nation. Nothing in the book says our governors cannot work with IPOB, even if secretly, in this respect.

With what is going on across the country today, only God knows what will pan out in the months ahead. We should be ready to meet any challenge when and if it comes and it is only if we have something on ground like the one of IPOB that we can try and defend ourselves. We will of course be deluding ourselves if for once we think we can rely on the police and army for protection since they are nor answerable to us.

The west have already taken their own destiny in their hands. What are we waiting for?

You can hate or love the ESN by IPOB, but it is a child of circumstance. It would not exist if our governors had done the needful earlier. It is never too late to double back and do the needful.