On Thursday August 4, the Benue State Government took the bull by the horns by launching a 500-man strong state security outfit codenamed, Community Volunteer Guards, with a view to adequately protecting the people of the state from the menace of Fulani terrorists that had virtually decimated the rural population of the state.

At the launch, Governor Samuel Ortom disclosed that the personnel of the new security outfit would be armed with AK-47 and AK-49 rifles after two weeks of paramilitary training to Face ‘Fulani Terrorists’.

Benue State has witnessed some of the most brutal attacks by Fulani herdsmen, a development that has led to scarcity and high cost of yams in the country. Benue State leads in the farming of yams in the country but owing to the sacking of farmers from their farms by the terrorists, yams, a staple food for many Nigerians, have become scarce and very costly.

Ortom said he was launching the security outfit as a response to the failure of the federal government led by President Muhammadu Buhari to protect Nigerians.

Since the Buhari Government has failed to disarm the Fulani terrorists who have continued to maim and kill our people at will, the state government is going to apply for a license to legally procure AK-47, AK-49 and other sophisticated weapons, for the Benue State Volunteer Guards to enable them to tackle these murderous terrorists effectively,’ Ortom was quoted to have said. 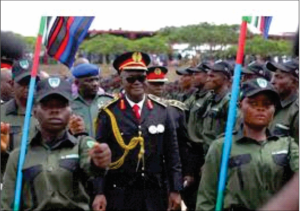 The formation of the new security outfit by Ortom is bound to generate some controversy, especially given the aspect of the procurement of sophisticated weapons which only the conventional security outfits are allowed to use in the country. But past experience has shown that the terrorists, who also use such sophisticated weapons, have been overpowering even the conventional security outfits. If this were the case, how much more will it be easy for them when they come up against local vigilantes? This accounts for the high success rate of their attacks on communities.

Although only conventional security outfits in the country are allowed to use such weapons, the situation in Nigeria demands that individuals, groups, communities and state governments should take measures to protect themselves from what is continually looking like government sponsored killings.

That the Nigerian Government has not been able contain the spate of terror attacks in the country is disgraceful and worrisome. Today, even police and military formations are being attacked, with the presidential guards recently coming under fire. All this while, the federal government has appeared clueless amid suspicions of a plot by the federal government to allow the government to be overrun by the criminals called bandits to achieve some secret agenda. Fantastic as these suspicions are, what has happened in recent months leave one with no option than to believe that they may have some substance.

This is why it becomes imperative that states come up with measures to protect their people. In this light, we believe the Benue State Government may have just given other states the template to confront the situation and stay on top of it.

Any government’s primary duty is to protect life and property. The federal government has woefully failed to do this and the states now have little option than to ensure they do not fail too. The security situation in the country has passed something that anyone can feign ignorance about. It is a no-brainer that drastic actions have to be taken to permanently rid our society of the menace of blood hounds.