Save Us from Starvation, Secretariat Staff Beg SE Govs

In a letter addressed to the Enugu State Traditional Rulers Council, HRH Igwe (Amb) Lawrence Agubuzo, dated November 18, the secretariat staff said they were using the occasion of the birthday of Dr Nnamdi Azikiwe to bring their plight to public knowledge as they could no longer bear the hardship they went through owing to the non-payment of their salaries. 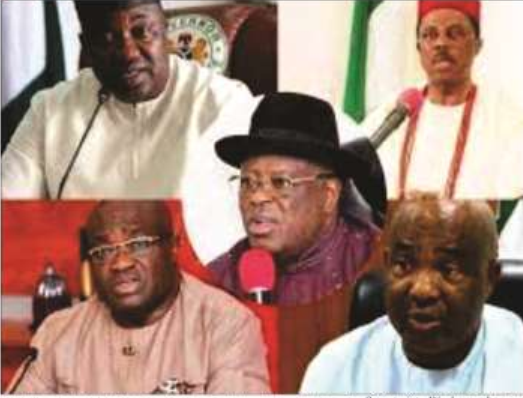 In the letter to the chairman of Enugu State Traditional Rulers’ Council, the aggrieved staff members of SEGF secretariat stated, ‘We humbly write to brief you (today, November 16, the birthday of the late Dr. Nnamdi Azikiwe, a revered Igbo man), on the plight of the staff of the South East Governors’ Forum (SEGF) Secretariat. We have chosen to write to you because the SEGF Secretariat is domiciled in Enugu, the Headquarters of the South East Region. Besides, Your Royal Highness is an esteemed father and icon.’

They claimed that since February, 2021, the South East Governors had withheld the salaries of the five Directors, aforementioned, who were drawn from the five states of the Southeast Zone.

‘The last salaries we received from the SEGF were paid at the end of February, 2021. No sack, dismissal or dissolution memo or letter has, as at the time of writing this letter, been served on any of us. No explanation has been offered to us as to the reason why we have been abandoned in this most despicable way.

‘We have wives, children and a retinue of other dependants (including old parents, sick persons and pensioners) who look up to us for their needs. Given the current economic crunch in Nigeria, those workers who operate in different governmental and non-governmental organizations across our country find it difficult to eke out a decent existence. Your Royal Highness can imagine how we have been faring since the past eight months.

‘As Ndigbo, we at the SEGF ordinarily thought, upon our recruitment, that our Igbo governors at the SEGF would treat us as fellow brothers from Ala-Igbo, the South East Region of our country. Among other things, we were euphoric that together with our employers/principals, we would tackle the issue of marginalization of Ndigbo.

‘But alas, while our governors fete our Muslim brothers and sisters with drinks, food and even give them purse during their festive periods, on the contrary, they have abandoned us; a situation which may lead to our early demise because of frustration, high blood pressure, depression, and hunger,’ the SEGF secretariat staff members stated.

They therefore appealed to Igwe Agubuzo to intervene on their behalf, by bringing their issue before their employers (governors) to treat them as fellow human beings and pay them their outstanding eight months’ salaries, plus Christmas bonus, especially as December was near.

‘It will be tragic if we are not paid our accumulated salaries before the month of December, 2021. That will spell a terrible Christmas for us, our families (nuclear and extended) and our numerous dependants. It will simply mean a re-enactment of a similar Christmas of starvation which we had encountered in the past because of a similar reason,’ they pleaded.

When contacted on the phone to react on behalf of his boss, the Ebonyi State Commissioner for Information, Bar Orji Uchenna Orji, said tersely to Fides, ‘I am Commissioner for Ebonyi State, not South East. Please the Head of the Secretariat is the current SSG of Enugu State. Call him. The Forum is not Ebonyi State. The staff is not known to any State Civil Service structure and the issue of salary is out of place here.’

But one of the complainants, Mr Mike Udah, who is also a former Chief Press Secretary to the immediate past Anambra governor, Mr Peter Obi, in reacting to the submission of Orji, expressed surprise at Orji’s answer, wondering if Orji was not the one that usually placed SEGF’s adverts given to him by the Ebonyi governor, Dave Umahi. He also wondered how Orji could have been doing so if he did not work in SEGF.

‘Ask him why he responds to criticisms made against Umahi (his boss) in the governor’s position as SEGF chairman. Since he does all of the above, he should affirm or deny that SEGF owes its staff 9 months’ salaries,’ Udah stated.

Others were the President-General of

Christian Association of Nigeria (CAN) South East Zone; as well as the President, South East Chamber of Commerce, Industry, Mines & Agriculture, and the Chairman, Nigeria Governors’ Forum and