Saints of The Day: September 8th Feast of the Nativity of the Blessed Virgin Mary

The Nativity of Our Lady, which happened, according to Baronius, in the year of the creation of the world 4007, on a Saturday, at daybreak, fifteen years before the birth of our Savior. This feast was instituted on the 8th of September, in the Greek Church and in the Latin, in the year 436, according to the same Baronius; and, in France, by Saint Maurillus, Bishop of Angers.

In the “Apocryphal” writings we read that the Virgin Mary was sprung from the royal family of David and educated at Jerusalem in the Temple of the Lord. Her father’s name was Joachim and her mother’s Anna. Her father’s family was of Galilee and her mother’s of Bethlehem. By some, Joachim is described as exceedingly rich. Tradition is unanimous that Mary was an only child, an heiress, and, therefore, so many of the eligible men were eager to obtain her hand in marriage. 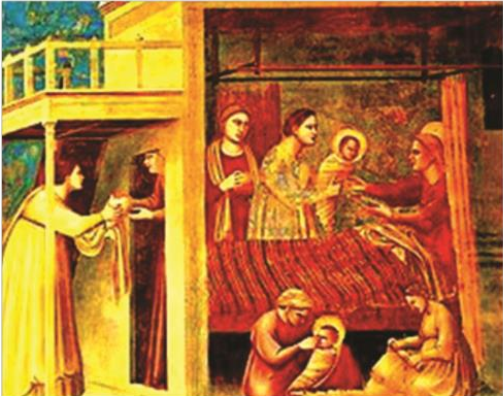 Joachim and Anna lived chastely without any children for about twenty years, in the favor of God and the esteem of men. They vowed that if God should favor them with any issue, they would devote it to the service of the lord, for which reason they went every season of the year to the Temple. Again, the “Aprocryphal” tells us that both Joachim and Anna suffered much because of their childlessness, for to be this was considered a punishment from God.

However, their prayers and sacrifices were rewarded and being informed by an angel that they would have a child, they offered ten she-lambs and twelve tender calves to the Lord in the Temple. And Anna brought forth, and inquiring of the midwife, she was told it was a girl, and she said:

“My soul has been magnified this day,”

and she laid her child down. The days having been fulfilled, Anna was purified, and gave the breast to the child and called her name Mary. In Mary’s soul from the very beginning was the bliss of heaven; in the first instant of her conception, Mary, by a singular grace and privilege granted by God, was preserved exempt from all original sin.

“Thou art all fair, O my Love, and there is not a spot in thee.” And “Who is she that cometh forth as the morning rising, fair as the moon, bright as the sun, terrible as any army set in array.”

Holy Mother Church has selected September 8, as the day to celebrate the Feast of the Birth of the Blessed Virgin Mary, Mary’s Nativity, Theotokos Deipara, Mother of God. God never created a being more perfect, more admirable, than she is; He imbued her with a richer grace, power, and blessedness; but in one simple respect she surpasses all creatures, namely, that she is the Mother of her Creator – giving her sanctity and greatness that cannot be surpassed.

Men sometimes wonder that we call her Mother of Life, of Mercy, of Salvation; what are all these titles compared to that one name, Mother of God?

Joachim and Anna bestowed the name of Mary on their little daughter, and she has become “Our Lady,” the greatest lady of all. What a happy choice of name! Mary is of all names the most common and the least vulgar, the name which is never really given, but lent, to those who have the honor to bear it, for it belongs by particular right to her who was the first to make it glorious. “Oh Mary! How great is thy name!”

Patron: All people named Mary, in any form.

Learn prayers to Mary, such as the Angelus, Litany of Loreto, Memorare, Hail Mary, and Hail Holy Queen.

Start researching and planning a Mary Garden, or a special plant or flower for each feast day of Mary. This can be for next spring, but if some bulbs are to be included, this is the time to plant them!

Contemplate on how all the feasts of Mary point to the mysteries of Christ and our salvation history. Biblical readings: Proverbs 8:22-35 and Matthew 1:1-16 (this points to the appreciation of the heritage and family of Jesus).

Have a birthday party for Mary, with a specially decorated birthday cake and birthday decorations. Blue is the traditional color of Mary’s mantle, so incorporating blue into the decor and food is quite appropriate. Try making an all white cake symbolizing Mary’s purity, or cookies with white icing.

White meringue cookies (or kisses) would also remind one of Mary’s sinlessness. Birthday parties don’t need special explanations for children. Have each child present a “gift” to their Mother Mary, such as spiritual bouquets, faults or virtues to work on, corporal works of mercy, etc. Learn to make string knot rosaries to give as “favors.”

Find out about the devotion to “Maria Bambina” or “Baby Mary.”

Women for Faith and Family have some wonderful ideas for this feastday.