The deathbed confession of a dying servant opened Vincent de Paul’s eyes to the crying spiritual needs of the peasantry of France. This seems to have been a crucial moment in the life of the man from a small farm in Gascony, France, who had become a priest with little more ambition than to have a comfortable life.

The Countess de Gondi—whose servant he had helped—persuaded her husband to endow and support a group of able and zealous missionaries who would work among poor tenant farmers and country people in general. Vincent was too humble to accept leadership at first, but after working for some time in Paris among imprisoned galley slaves, he returned to be the leader of what is now known as the Congregation of the Mission, or the Vincentians. These priests, with vows of poverty, chastity, obedience, and stability, were to devote themselves entirely to the people in smaller towns and villages. 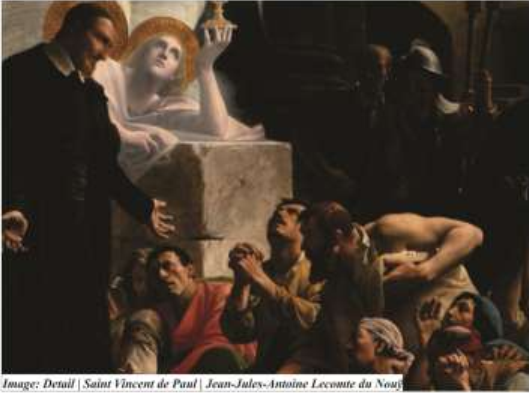 Later, Vincent established confraternities of charity for the spiritual and physical relief of the poor and sick of each parish. From these, with the help of Saint Louise de Marillac, came the Daughters of Charity, “whose convent is the sickroom, whose chapel is the parish church, whose cloister is the streets of the city.”

He organized the rich women of Paris to collect funds for his missionary projects, founded several hospitals, collected relief funds for the victims of war, and ransomed over 1,200 galley slaves from North Africa. He was zealous in conducting retreats for clergy at a time when there was great laxity, abuse, and ignorance among them. He was a pioneer in clerical training and was instrumental in establishing seminaries.

Most remarkably, Vincent was by temperament a very irascible person—even his friends admitted it. He said that except for the grace of God he would have been “hard and repulsive, rough and cross.” But he became a tender and affectionate man, very sensitive to the needs of others.

Pope Leo XIII made him the patron of all charitable societies. Outstanding among these, of course, is the Society of St. Vincent de Paul, founded in 1833 by his admirer Blessed Frédéric Ozanam.

The Church is for all God’s children, rich and poor, peasants and scholars, the sophisticated and the simple. But obviously the greatest concern of the Church must be for those who need the most help—those made helpless by sickness, poverty, ignorance, or cruelty.

Vincent de Paul is a particularly appropriate patron for all Christians today, when hunger has become starvation, and the high living of the rich stands in more and more glaring contrast to the physical and moral degradation in which many of God’s children are forced to live.

Saint Vincent de Paul is the Patron Saint of: