It is God who calls; human beings answer. The vocation of John and his brother James is stated very simply in the Gospels, along with that of Peter and his brother Andrew: Jesus called them; they followed. The absoluteness of their response is indicated by the account. James and John “were in a boat, with their father Zebedee, mending their nets. He called them, and immediately they left their boat and their father and followed him” (Matthew 4:21b-22).

For the three former fishermen—Peter, James and John—that faith was to be rewarded by a special friendship

with Jesus. They alone were privileged to be present at the

Transfiguration, the raising of the daughter of Jairus and the agony in Gethsemane. But John’s friendship was even more special. Tradition assigns to him the Fourth Gospel, although most modern Scripture scholars think it unlikely that the apostle and the evangelist are the same person.

exquisite honor of caring for his mother, as John stood beneath the cross. “Woman, behold your son…. Behold, your mother”

Because of the depth of his Gospel, John is usually thought of as the eagle of theology, soaring in high regions that other writers did not enter. But the ever-frank Gospels reveal some very human traits. Jesus gave James and John the nickname, “sons of thunder.” While it is difficult to know exactly what this meant, a clue is given in two incidents. 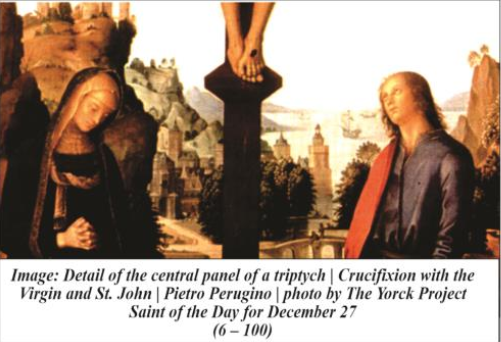 In the first, as Matthew tells it, their mother asked that they might sit in the places of honor in Jesus’ kingdom—one on his right hand, one on his left. When Jesus asked them if they could drink the cup he would drink and be baptized with his baptism of pain, they blithely answered, “We can!” Jesus said that they would indeed share his cup, but that sitting at his right hand was not his to give. It was for those to whom it had been reserved by the Father. The other apostles were indignant at the mistaken ambition of the brothers, and Jesus took the occasion to teach them the true nature of authority:

“…[Whoever wishes to be first among you shall be your slave. Just so, the Son of Man did not come to be served but to serve and to give his life as a ransom for many” (Matthew 20:27-28).

On another occasion, the “sons of thunder” asked Jesus if they should not call down fire from heaven upon the inhospitable Samaritans, who would not welcome Jesus because he was on his way to Jerusalem. But Jesus “turned and rebuked them” (see Luke 9:51-55).

spending the night in jail together. The mysterious experience of the Resurrection is perhaps best contained in the

words of Acts: “Observing the boldness of Peter and John and perceiving them to be uneducated, ordinary men, they [the questioners] were amazed, and they recognized them as the companions of Jesus” (Acts 4:13).

The Apostle John is traditionally considered the author also of three New Testament letters and the Book of Revelation. His Gospel is a very personal account. He sees the glorious and divine Jesus already in the incidents of his mortal life. At the Last Supper, John’s Jesus speaks as if he were already in heaven. John’s is the Gospel of Jesus’ glory.

It is a long way from being eager to sit on a throne of power or to call down fire from heaven to becoming the man who could write: “The way we came to know love was that he laid down his life for us; so we ought to lay down our lives for our brothers” (1 John 3:16).Saint John the Evangelist is the Patron Saint of: Turkey