Ifeyinwa Fidelis is sad. She is sad that a fellow female, and an officer of the Nigerian Army, could humiliate and dehumanise her without compunction. But she is sadder still that rather than take stern disciplinary action against that female officer, the military authorities appear stalling for time.

Ifeyinwa is set to complete her national service by the end of October.  Are the military authorities then ogling her exit date to bury the matter?  They should perish that thought — if any! 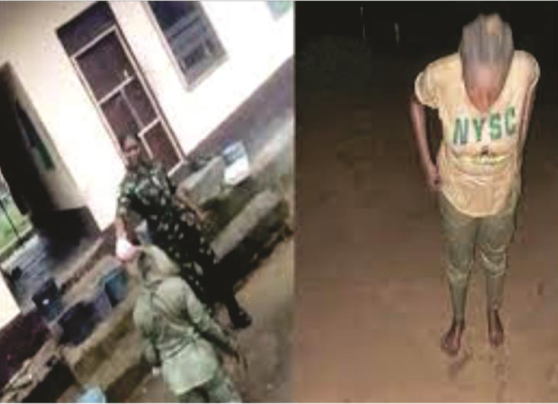 ‘The incident started when the commander of the Brigade hosted a drilling competition. I was chosen as part of those who would usher in guests.  When we got to the place, Ebutu Barracks, I saw one of my captain friends, who is a Muslim and married. We played ayo game together. When I saw him, I tapped him and said that he was even there before the ushers.  We started laughing only for that lady [Lt. Anele] to shout at me, saying you don’t touch an officer in uniform.”

Ifeyinwa said she withdrew into her shell after receiving the A, B, C of how not to touch a military officer in uniform. One thing followed the other until the said officer summoned her to the back of the barracks and the unimaginable happened:

‘She now asked them to bring sand. She mixed it inside water and started pouring it on my head. She opened my [NYSC] uniform and made sure she poured it all over my body.  While she was pouring it, she was insulting me. She said I opened my gutter mouth to tell [report her to] her superior; that if not for Army uniform that if she sees me outside, would she ever talk to me.’

‘When the water she was pouring on my body was itching me, I had to remove my bra. When I removed it, she said this is the cheap bra that I wear; and when last did I wash it, calling me a dirty pig. She said after dealing with me today, the next time, I would not open this my mouth to mention her name.’

For sure, this cannot be the ways youth corps members are punished, even if they commit an offence in camp. Sadly, however, Lt. Anele was sent on three months training, shortly after the incident.  Although the training could have been long scheduled, the optics fuel suspicions that the Army might not be interested in pursuing the matter, beyond its apology to Ifeyinwa.

That Lt. Anele has not even deemed it fit to call and apologise to the victim either shows the contempt she has for the corps member and even for the army, which had initially dissociated itself from her alleged act; or the fact that she is “untouchable”, as the victim claimed, though that would appear far-fetched given the military’s well-oiled disciplinary regimen. 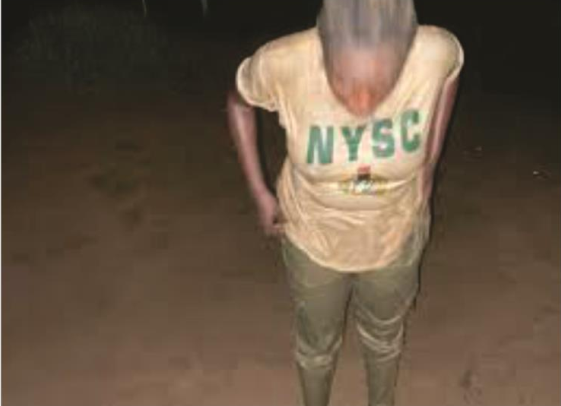 Clearly, the military authorities cannot be blamed for not taking the appropriate action on the matter between July 28 and September 22 because they were probably not aware. But they should take responsibility for their inaction or tardiness since September 23, when the video of the inhuman act went viral.

It is clearly one month since then. A month is enough to conclude investigations into a matter, as simple and straightforward as Ifeyinwa vs. Chika. That all appears quiet from the military’s end, thus far, is enough to fuel suspicion that the Army wants to let the matter die a natural death; without one of their own taking the due comeuppance for her indiscretion. This is much more so that the victim was only about a month away from completing her national service when that video went viral.

These days, such matters get to the public domain through the social media. Lt. Anele probably never envisaged that the humiliation and dehumanisation of the corps member, in that crude and most sadistic fashion, was being recorded; and so apparently did not expect the backlash it has attracted. Indeed, she thought she had sufficiently covered her tracks by carrying out the barbarity at the back of the barracks, rather than in the open, where all eyes would be on her.

On Lt. Anele, therefore, we call on the military to do the needful, without further delay.

If Ifeyinwa had been a soldier who had erred against military rules and regulations, and she was treated the way the victim was as punishment, it would still have attracted public opprobrium because, even in combat, soldiers are guided by rules of engagement.

The civilised community frowns against departure from such rules.  Besides, to have so thoroughly traumatize someone on national service is, to say the least, disgusting. That the NYSC itself has not supported one of its own, despite the alleged breach of procedure, leaves a sour taste in the mouth. There is a sense that the NYSC has succumbed to the army’s blackmail and subject the young woman to the sour fruits of acrimonious officer and official impunity.

They forced the lady to go home to Lagos while she was still serving in Cross River State. NYSC still paid her monthly allowances and promised to give her discharge certificate againsr all NYSC protocols. The NYSC is disobeying the law in order to cover a crime.

If the Military High Command felt sufficiently embarrassed, as it reportedly said last month after the video went viral, then it should take appropriate punitive action against Lt. Anele. This would serve the dual purpose of redeeming the Army’s image, apart from sounding a note of warning to other military officers that might want to overreach themselves.

Lt. Anele should not only be punished, everyone that saw Ifeyinwa’s humiliation must see the Army officer has been p jhgrunished.  This includes NYSC connivers as well. That is how to bring a deserving closure to such a serious matter.