In preparation for the Awka Diocesan Priests and Diaconate ordination billed for July 16, 2022, the Society of Catholic Apostolate has organized the final profession of one of her brothers, Bro. Innocent Okekeagu.

The final consecration of Bro. Okekeagu who will be the only candidate to be ordained Deacon for the July 16 ordination, was held on Saturday, June 18, at Vincent Pallotti House, Mbaukwu, Awka South LGA, Anambra State.

Fides gathered that the final consecration was part of what qualified the brother to be ordained a Deacon for the Roman Catholic Church.

Speaking after the final consecration, the Delegate Superior of Pallotine, Nigeria, Rev. Fr. Cosmas Chidi Onwukwe, congratulated the final professed brother for what he described as his burning zeal and dedication in the things of God and described the brother as a meek and humble individual whose active and communicative nature, he said, had been a plus to the Pallotine Community.

The Delegate Superior, while commending Bro. Okekeagu, recalled that the candidate who started along eight others who later went into different life endeavours, had remained consistent to the call to priesthood.

He described the consecration as symbolic to the religious congregation as they took vows of consecrating their lives to God through their founder and pledged obedience, chastity, poverty, sharing of resources, dedicated spirit of service and perseverance.

Earlier in his homily, Fr. Onwukwe emphasized the need for people to rely on God for all their needs and aspirations without bothering themselves. 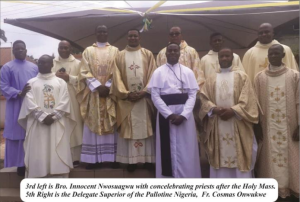 He beckoned on people to devise ways of caring for others and regretted that people were mostly selfish and self-centered. He maintained that the core principal value of the Pallottine was caring for others.

Speaking to Fides, Bro Innocent Nwosuagwu noted that when one joined the congregation, either as a religious priest or brother to be, such a person must be consecrated by promising to live up to some virtues like chastity, poverty and obedience, saying that the Pallottine Congregation added perseverance, spirit of service and sharing of resources, apart from the three well known evangelical councils that every congregation must profess.

He noted that the perpetual vow which he professed entailed that he would live according to the evangelical councils all his life.

Bro. Nwosuagwu disclosed that he had spent 10 years in the congregation and attributed God’s grace to his driving force, saying that through continuous discernment, he would keep discovering what God had in store for him.

He thanked God and his benefactors, noting that their presence had made what he described as a very difficult journey easier.

The highpoints of the event included the consecration, renewal of vows for the reception of a new brother into the congregation, cutting of cake and toast in honour of Bro Innocent Nwosuagwu, dance and presentation of gifts.