True to his promise of aggressively addressing the road infrastructure in the state, roads have taken the largest chunk in the revised budget presented to the state assembly, Thursday, by Gov Chukwuma Soludo, constituting 31%, reports Jude Atupulazi.

Addressing the lawmakers during the presentation, Soludo said, ‘We have declared a state of emergency on rebuilding our road infrastructure and traffic management. About N52 billion or about 31% of the total budget is for the Ministry of Works and Infrastructure and we intend to simultaneously invest in roads in most of the local governments, paying special attention to our urban regeneration agenda. 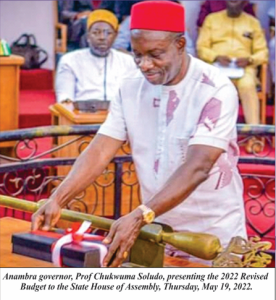 ‘We have requested the Federal Government to kindly intervene on emergency basis on a number of federal roads in the state that have become nightmarish death traps. We confidently expect their urgent responsive action.

The governor while presenting the revised budget on the floor of Anambra State House of Assembly said his government hit the ground running as promised, and remained committed to creating a livable homeland for Anambra people.

He said the revised budget was meant to meet the realities on ground, and also help his government to succeed.

‘Mr. Speaker, Hon members. The purpose of the 2022 Revised Budget is to reflect current realities, challenges, and priorities of the new administration and Ndi Anambra.

‘We are undaunted by the state of the treasury. We have seriously started reforming our system of tax administration to significantly ramp up our internally generated revenue over the coming years. In the meantime, the dire needs of Ndi Anambra and our transformation agenda cannot wait.

‘We are working on a mixture of financing options (including debt that is ring-fenced to fund bankable projects and/or infrastructure with impacts on the economy) to guarantee efficient and effective service delivery to our people, while ensuring fiscal sustainability over the medium to longer terms. The details of these will be laid out in our 2023 budget,’ Soludo announced.

He gave the size of the revised budget as about N170 billion, versus the existing appropriation of N142 billion (with the capital expenditure accounting for 64% compared to 57% previously).