Roads in Anambra are in Dire Need of Facelift

Not long ago, the governor of Anambra State, Prof Chukwuma Soludo, announced that his government would declare a state of emergency on roads in Anambra State. That must have come as cheering news to many people in the state whose experiences while using the roads have been nothing but harrowing. 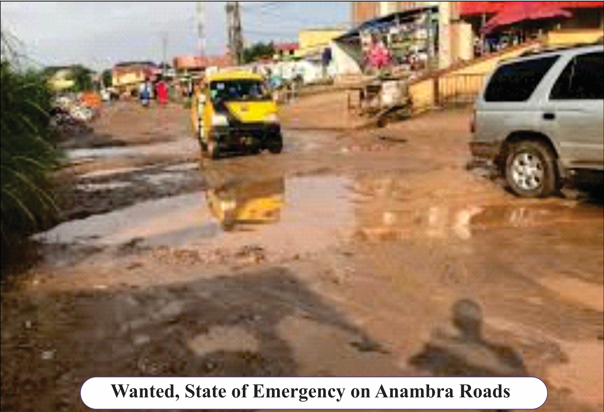 To say that the condition of roads throughout the state is horrible is to state the obvious. It is no more fun to travel around the state as virtually all the roads have collapsed. Even in the state capital of Awka, it is nothing to write home about.

The current state of affairs on our roads therefore calls for very urgent intervention and that is why we are happy with the declaration of the governor that his government would do so. And, indeed, a few days after the declaration we saw some attempts at walking the talk in some parts of Awka like the Everyday Supermarket and Millenium Industries junctions in the Okpuno areas. But weeks after red earth was removed from the gutters and the junctions blocked, no further work has gone on and those junctions have remained blocked, much to the chagrin of road users who have to seek alternative routes. We advise that work should resume in these areas immediately to restore free flow of vehicular traffic.

Other areas should also be tackled in the capital city with palliative work before full scale reconstruction can commence. The rainy season has returned and the condition of the roads will only get worse. This is why urgent action is needed now.

Again it will not make much sense if amid the bad state of roads, the agents of the Vehicle Inspection Office continue to stop motorists, demanding for road worthiness certificate. Why ask such when the roads are in such terrible condition and bad enough to make vehicles unworthy? Therefore the VIO officers should be asked to stay action on the roads until things improve, especially when their presence contributes to traffic issues. Besides, their place should be in their office where people should be coming to have road worthiness certificates issued to them. It is good to have sanity on the roads at this critical point that road users are suffering.

We do appreciate the enormity of work before the new administration in the state and we wish it all the best as it strives to restore the glory of the state.