As the spate of ritual related killings sweeps across the country, it has become increasingly necessary for the government to regulate the activities of traditional medicine practitioners and spiritualists posing as men of God. The need for this is occasioned by the involvement of these people in making charms for those involved in ritual killings as findings have shown.

Indeed, there is hardly anyone arrested with human body parts who has not confessed to bringing the parts to either a native doctor or to some obscure man of God who has assured them of becoming rich by procuring the said human parts. This means that these people exert a great but negative influence on their clients who can then do anything they are told in their quest to get rich.

To this end, given the negative aspects of their actions, we urge the governments of the various states to enact an enabling law that can give the government and law enforcement agencies the power to arrest such people for prosecution. 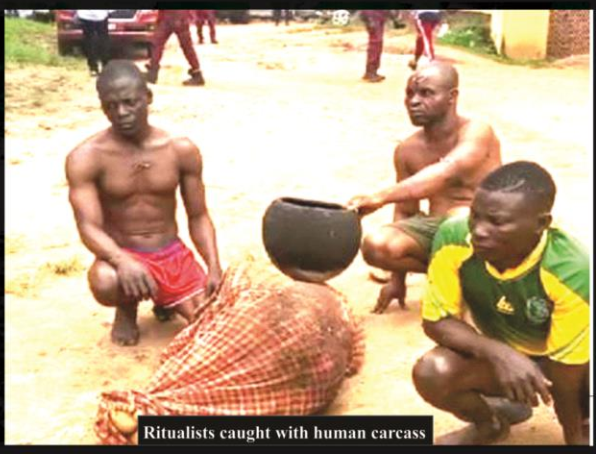 The government, working closely with town union leaderships, should ensure that all traditional medicine practitioners are registered and their activities regulated. It should also do same for any church that is not among the traditional churches. It has been discovered that many of the so-called mushroom churches and their pastors are fake and only use their church to hide their real business.

We believe that once government can get these people registered, monitoring their activities will become easy. But it can only be easy if the communities are genuinely prepared to stamp out the menace of these youths and their collaborators who in this case are the native doctors and fake pastors.

As was the case with the youths caught taking crystal meth or mkpulumiri who were asked to expose their source; a development that has seen a sharp reduction in the taking of such, it will also be good to ascertain those behind the present scourge.

Communities can report these fake practitioners to the government for appropriate action. It is known that without these native doctors and spiritualists, killing for ritual purposes will cease to occur since the killers go to them to perform the rituals and also carry out the killings on their instructions.

We fear that if nothing drastic is done, these killings will continue and that means the number of missing people will continue to rise.