Stakeholders in Anambra State have decried the rise in rape, domestic and gender based violence in the state.

This is following recent cases of gender based violence in the state, some of which involved minors, while others resulted in deaths.

Early in the week, the story broke of the defiling of a 13-year old girl by four men in Nkpor, near the commercial city of Onitsha. The men, who were described as street urchins, were said to have had an altercation with a man in the neighborhood who condemned most of their atrocious acts in the area, which included drug abuse, stealing and molestation of young girls.

The men, instead of showing remorse over the matter, took offence at what they deemd the temerity of the men in trying to caution them, and decided to mete out evil on the man’s daughter because he father dared to caution them. The men’s names were given as Sunday, Emelie, Chiedu and Nwa awọ.

The four men had allegedly dragged the young woman to Nkisi River, a popular river in the area, where they first beat her up and told her to comply with their act, before raping her in turns.

Three out of the four men were later arrested through the operatives of the National Agency for Prohibition of Trafficking in Persons (NAPTIP) working in collaboration with vigilante operatives.

The victim, who narrated her experience, said she was beaten up by the men before she was dragged to the area where she was violated. While three of the four men were arrested, the fourth escaped after operatives of NAPTIP and vigilante stormed the area to arrest them.

The arrest was done at the instance of the Anambra State Commissioner for Women’s and Social Welfare, Mrs Ify Obinabo, who had been at the forefront of fighting against gender-based violence. 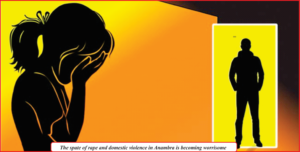 The victim, while narrating her ordeal to the commissioner, said, ‘I was first slapped by the boys, then dragged to Nkisi before I was ordered to remove my clothes and the suspects took turns to have carnal knowledge of me.’

Meanwhile, another similar case within the week was that of a native doctor who was in a relationship with a single mother of two.

It was gathered that the native doctor, whose name was given as Nonso, had promised the 25-year old lover marriage.

On the fateful day, the native doctor detailed a commercial motorcyclist to bring the woman and her children to his house. They arrived but could not go back home that same day because it was late. But late into the night the native doctor told his lover that he had a surprise for her.

‘On that fateful day the suspect sent a bike man to bring me and the kids to his house. He didn’t allow us to go home that day because it was already late. He later told me that he had a surprise for me and he used a white handkerchief to blindfold me,’ the woman narrated.

She said it was at that point that she struggled to know what was happening but unfortunately it was late as the suspect had already brought a knife and started slitting her throat.

The victim further noted that although she struggled for her life, she was overpowered and dragged to an already dug 4-5ft grave at the suspect’s backyard and she was pushed into the grave. She also said that the suspect who threw a big stone over her head went to bring a shovel to cover her when she started shouting, thereby alerting the suspect’s sister who had long slept off.

According to her, it was the suspect’s elder sister who came to her rescue after she had also alerted members of the public who in turn captured the native doctor, but by then the bike man who was his accomplice had escaped.

A journalist with the Anambra Broadcasting Service (ABS) who spoke to Fides in Awka said she was aware of the matter. ‘Incidences of rape are becoming too high in Anambra State. This case of the men who gang-raped a 13-year old girl should be condemned by all people in society.

‘I heard they had an altercation with the father of the girl who was not supportive of their atrocious acts in the community, but instead of heeding the advice of the man to them, they decided to deal with him through the daughter.

I was so shocked when they were being interviewed, and one of them said he did not participate in the act. But the girl said it was a lie, that he was the second person to rape her. It was so blood chilling. If there is a way we can help to inform communities against acts like this, it would be fine,’ Eze said.

As the number of sexual abuse cases, domestic and gender based violence, continues to rise in Anambra, and with many condemning the trend, the Anambra State Government has vowed to fight it and bring it to an end. Early August, a similar situation had arisen in Nnewi when the chairman of Nnewi North Local Government Area, Hon Mbazulike Iloka, was alleged to have beaten his wife to death. Sources had said that the politician was fond of beating up his wife, even though he denied the allegation, insisting that his wife was too dear to him to be laid hands on.

But reports showed that the wife who was said to have been manhandled on a Sunday morning had injuries all over her body, including a pronounced head injury which was seen as a tell-tale sign of violence.

Commissioner Obinabo who spoke on the matter said such act would not be condoned by the Prof Chukwuma Soludo administration. The commissioner, at a time when many were still speaking in hushed tones because of the status of the man involved, told all in an interview that she had interviewed the relatives of the deceased lady, who, she said, boldly affirmed that there had been cases of violence between the politician and his wife.

To further demonstrate the resolve of not entertaining such in his government, Soludo removed the local government chairman and replaced him with another person, while also setting up a commission of enquiry into the death of the lady, and appointing a pathologist. He also gave the accused politician the opportunity of nominating a pathologist into the committee.

Meanwhile, to underscore its intolerance to gender based violence, the state commissioner has vowed to ensure that people involved in such acts are punished. The native doctor who tried to bury his lover has been remanded in prison custody after trial by the Children, Sexual and Gender Based Violent Court. Though the matter was adjourned to December, his accomplice, the commercial motorcyclist, has also been ordered to be arrested.

In the case of the three men apprehended for raping the 13-year old girl, the police were also called upon to ensure arrest of the fleeing member of the gang, Nwa Awo, while the others are currently in police custody waiting to be charged to court.

Obinabo said, ‘They have been handed over to the Police State CID Awka, and they will be arraigned in court for prosecution.’