The NULG boss gave the charge while addressing members of the Union at a rally which preceded a press briefing in Awka.

The Union leader said the development became necessary, following the poor and fraudulent ways of contracting and collectin local government revenue windows by some agents of the state government.

Comrade Adigwe said that revenue collections had rendered both the administrative and financial structures of the local government system bankrupt, non-functional and dilapidated. 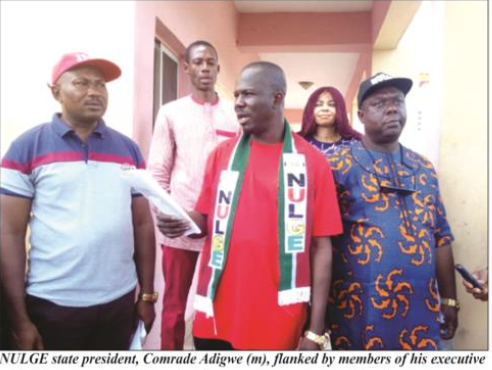 According to him, the fraudulent collection of revenue in the state is contrary to the provisions of Schedule Four of the 1999 Constitution as amended.

‘Since this arrangement, which spans over a decade, the state government did not live up to the agreement of remitting the council’s share of the collected revenue.

‘The state government abused this privilege and even emasculated the local government of over 80 per cent of its revenue windows outside the ones on the agreed list.

‘The big surprise is that the state government levy exorbitant fees over and above what is obtained in the revenue tariffs of the LGs, and residents are paying with no corresponding benefits.

‘With all these financial emasculation, the local governments can no longer perform their basic duties effectively and efficiently,’ he said.

Comrade Adigwe said that the revenue windows of the council, as enshrined in the 1999 Constitution and the Anambra State Laws of 2005 had been taken over by the bonafide custodians -the LGs.

‘NULGE in Anambra, hereby terminates all the previous agreement with the state government on revenue collections on grounds of abysmal failure on the part of the state.

‘Arbitrary levying of fees and licences to the public without appropriate legislation by the state House of Assembly are hereby illegal according to the law.

‘We urge the public to stop paying fees, levies and dues accruable to the local governments to the state government or face prosecution,’ he said.

Also, Mr Augustine Nwafor, Vice President, NULGE Anambra, said the non- conduct of local government election in the state was contributing to the inefficiency of the system.

According to him, it would helped to standardized the councils in the state.