Residents of Idoko Drive, Federal Housing Estate Onitsha, have commended Governor Chukwuma Soludo for commencing the construction of the road that connects them to the 3-3 Road.

They made the commendation while speaking to our correspondent, who monitored the pace of work on the road.

When our correspondent visited the site, men of the firm handling the project were seen discharging their duties.

It was also observed that earth work was on-going as heavy-duty equipment were seen working at various locations, excavating and replacing with laterite. 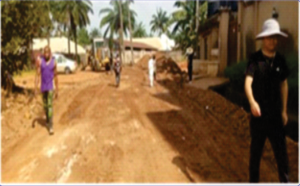 Speaking, a resident of the area, Pastor Jonathan Okoji-Uwakwe, appreciated Governor Soludo for giving them access through the road, adding that it will open up a lot of business opportunities on completion.

For the site manager, Engineer Shawn TEC, the Akpaka-Nsugbe Road is seven point seven kilometers with a spur to federal housing, but noted that they decided to complete the federal housing axis which is about five hundred meters to give residents of the area alternative route before the Akpaka to Nsugbe portion.