The NYSC Scheme was created in a bid to reconstruct, reconcile and rebuild the country after the Nigerian Civil War. The unfortunate antecedents in our national History gave impetus to the establishment of the National Youth Service Corps, NYSC by decree No. 24 of 22nd May, 1973 which stated that the NYSC is being established ”with a view to the proper encouragement and development of common ties amongst the youths of Nigeria and promotion of national unity”.

As a developing country, Nigeria is further plagued by the problems attendant upon a condition of under development, namely; poverty, mass illiteracy, acute shortage of high skilled manpower (coupled with uneven distribution of the skilled manpower that are available), woefully inadequate socioeconomic infrastructural facilities, housing, etc.

There is no gainsaying the fact that the future of any country depends on the youths. The youths of Nigeria acknowledge this fact, and have consistently laid claim to the nation’s leadership. While one may give credence to the saying that leaders are born, not made, one must also concede to the fact that leadership in a modern society requires a certain degree of preparation and orientation before the assumption of that role.

It was the need to look beyond the immediate present and to think of the future leadership of the country that necessitated the mobilization of certain categories of our youths through the NYSC scheme.

This was done with a view to giving them the proper guidance and orientation relevant to the needs of the country. The NYSC Decree No. 24 which has now been repealed and replaced by Decree 51 of 16th June, 1993 was then formally promulgated.

Right from the points of contact by youths from different tertiary institutions in Nigeria with the NYSC Scheme which is the NYSC orientation camps in all the States in Nigeria and the FCT, the oneness and brotherhood irrespective of cultural and social background or religion or tribe is promoted as both male and female youths mix freely and are divided into groups called platoons (military term that reflects the military training during the orientation exercise) and are united in carrying out various tasks and taking part in very healthy and productive competitions. 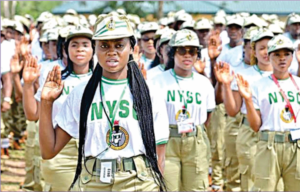 A lot of corps members discover their life partners during the service year and the resulting marriages practically cut across religions and tribes and this further justifies the reasons for the establishment of the scheme.

However, some Nigerians feel that the scheme has outlived its usefulness and the reason is because of some corps members have been killed in some parts of the country in the course of carrying out national youth service but the fact that a few corps members are killed doesn’t outweigh the immense benefits to Nigeria and the corps members themselves.

After all, people die due to road, air or water accidents and even communal clashes and so, it is not enough to justify the eradication of the NYSC scheme. But it is very important that the operations of the scheme needs to be radically changed. How? In the orientation camps, platoons or groups are recognised and that engenders group work. Only platoons compete and win; individual corps members don’t compete and individual corps members don’t win or lose.

This is what kills the essence of the NYSC scheme. Corps members ought to be posted in groups to different communities and each group ought to have as many if not all the Professions represented. So, for a group posted to a community, there should be a graduate Medical Doctor, Architect, Nurse, Pharmacist, Engineer, Educationist, Urban & Regional Planner, Town Planner, Estate Manager, Geographer, Accountant, Veterinary Doctor, Agriculturist, Fine Artist, Biologist, Chemist, Mathematician, etc and they are meant to solve the problems of the community and also attend to the needs of the community.

In the course of attending to the needs and solving the problems of the community, they will be meeting Federal, State and Local Government officials and individuals who are from the community and live within and outside the community.

It is very noteworthy that National Youth Service year will give corps members the opportunity to put into practice in the communities that they are posted to the things that they were taught in lecture theatres and classrooms in tertiary institutions in Nigeria. That is when service year truly becomes part of the years of experience. So, no more individual awards but only group awards at the end of each service year.

Eboh is a practising engineer, a corporate member of the Nigerian Society of Engineers and lives in Lagos, Nigeria.