Reporter’s Diary: I Just Drove through the Deadly Udi-4 Corner Road in Enugu

I just drove through the very deadly Udi 4 Corner Road  in Enugu State, a while ago. I prepared to leave Awka for Enugu in my car, but after church, I changed my mind.

The social media has been awash with videos of happenings on that road and many people are said to have been kidnapped and shepherded into the bushes, and ransom paid in millions of Naira. So, after church, I shelved the idea of driving to Enugu.

The idea was to join a public transport in the belief that commercial drivers are more knowledgeable about which other road to use since the Udi-4 corner Road is now kidnappers’ den.

It was a surprise that upon getting to Udi, instead of driving straight to Ngwo and using Milliken Hill, the driver turned right, straight to the very road leading to 4 corner which has been in the news for days now.

Some passengers made to protest, but the driver remained adamant, saying that he used the road that morning, while coming to Awka, and that security agents were everywhere on the road and it is now safe. True to his words, we drove through the road and it was safe.

Below are the little changes I noticed on the road – Just immediately one enters the road through the crossbar from the Udi end, a gate has been erected on the road. 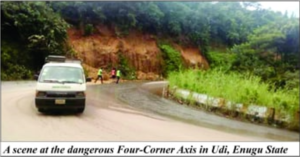 There is also a checkpoint consisting of a combined team of security personnel. A few metres away is another checkpoint manned by stern looking soldiers. Down into the bowels of the zigzag road is also another checkpoint, manned by a federal highway patrol team and soldiers; then, yet another check point and the last as you make to exit the crossbar on the four corner end. It is manned by soldiers, after which a similar gate like the first one is seen to have been constructed too.

What this means is that, for the short length of road leading from Udi to 4-corner, there are five checkpoints, consisting of teams of heavily armed security agents. That road is just about a kilometer long.

May I thank the governor of Enugu State, Rt Hon Ifeanyi Ugwuanyi, for his proactiveness in this area. I was among those who thought that Ugwuanyi was more occupied in following Rivers State governor, Nyesom Wike about, with other governor-colleagues, and leaving Enugu ‘in the hands of God’, in the name of politics than delivering the dividends of democracy for which he was elected.

For every chief executive, the buck for anything done wrong in your area of authority stops at your table. It is heartwarming that Ugwuanyi knows this and took charge immediately.

The alarm of the deteriorating level of security along the Udi 4-corner Road was made known and escalated widely by social media users. That is one benefit of the social media. Since the happenings on the road, it has been difficult to read of it in conventional media, and even when you get to do so, you read horrible stories in beautiful grammar delivered with a finesse that erodes the scary nature of the report. But trust citizen journalists – they deliver amateur videos, without even the leniency of avoiding scenes showing brutal killings and flow of human blood.

To make things worse, citizen journalists do not wait to confirm stories from police authorities or anyone else like the conventional journalists who get told all forms of lies by the authorities to water down the facts they already have. They just run commentaries on their amateur videos in very strong Igbo Language that leaves a chill running down your spine to show you the enormity of the story.

Kudos to the social media for this and kudos to Ugwuanyi for reacting promptly. But away from this, let me ask – for how long will Ugwuanyi keep the team of security men on that short stretch of road? Will it last for this week alone, or will it stretch to next week? Can Ugwuanyi sustain it until December?

Will it last up to Christmas? How about up to New Year and even to January, 2023 when fun-seeking holiday makers will be making their way back to their respective places of residence? Will Ugwuanyi also sustain it until February when many people will be seeking to come home to participate in the 2023 crucial election? If he does, where will the money come from? Will he cut money meant for other areas to ensure that this continues to be?

If you ask me, it is not just about flooding that short stretch of road with security operatives. While that is a temporary solution, a permanent solution should also be sought. Security is more about technology now than brute force. Ugwuanyi can relate with the leadership of 82 Division and let drones fly into the bushes around that area to seek out the location of the kidnappers.

Those who know the road said kidnap victims are usually taken far into the bush where the kidnappers have a camp. They also say that the kidnappers are not Igbo (meaning they can’t know the terrain better). So, why can’t we think of dislodging the kidnappers and even taking them out? If we do not, it will only take a while before the kidnapers will return, probably when the security operatives have left, thinking that normalcy has returned.

Drones and helicopters need to comb the entire bushes to take out the criminals. The locals in Udi need to be partnered with too. The bushes we refer to are people’s lands, people’s farms. No matter how interior and wide a bush or forest is in Igbo Land, it belongs to people and those people know the terrain far more than criminals who decide to come in to camp there.

Let’s not station our prestigious security agents under the scorching sun, day and night, just to ensure that some blood suckers will not emerge from the bushes and take travellers. Let’s rather take the fight to the den of the criminals, silence them once and for all, and let our soldiers return to the barracks and wait for another assignment where their attention is needed.

This piece by Eleke was written in late November