It was a mixture of joy and demonstration of mixed feelings by Staff as Omotade Ayodele Folorunso Benjamin, pioneer Director, South South Area Office, Asaba, held a valedictory meeting of staff at the Area Office yesterday.

As the meeting convened to review critical activities recently carried out by the Area Office was being rounded off, the outgoing Director, received the greatest shock of his life as Staff clinically ambushed and tactically waited for the usual, “Any Other Business” part of the meeting agenda, to unleash a carefully orchestrated surprise send forth party for the outgoing Director. 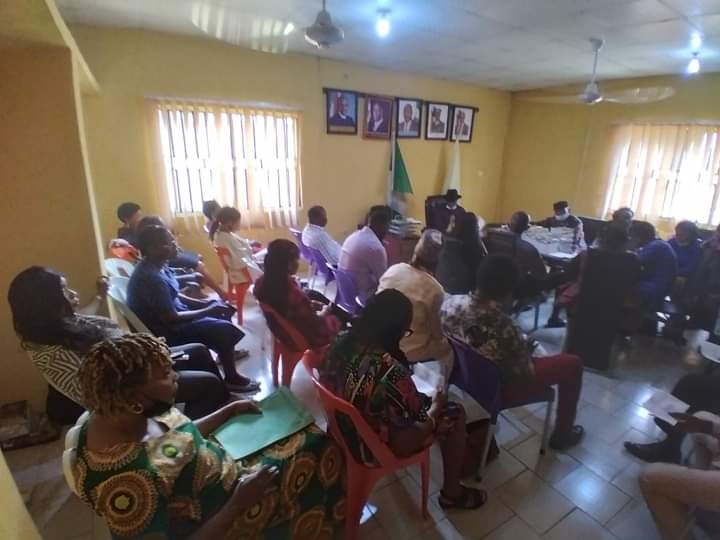 Members of staff of NYSC South South Area Office, asaba at a valedictory meeting held in honour of Omotade Ayodele Folorunso Benjamin, outgoing and pioneer director of the Area Office

It started as a presentation of a playlet, followed by inflow of quality assorted wines and sumptuously prepared foods. He was presented with a giant Ultra High Definition LG Flat Screen Television by staff as well as other individual gift items.

Earlier in the meeting,  the outgoing Director had informed Staff about his posting to the NDHQ as Director, Corps Welfare and Health Services. Many among staff, who could neither hide nor control their emotions as they cried openly, paid glowing tributes to the man, Omotade Ayodele.

In emotional laden speeches, many said they have been taught  and touched by exemplary leadership styles of the outgoing Director. Some said their lives have been transformed for the better with a resolve to always do what is just and right in line with the teachings of this erudite and astute administrator par excellence.

‘When you do what is right at all times, fear God and be good to people, then, you can go home and sleep without fear of any evil,’ he said.

Highlights of the event was unveiling and distribution of copies of his new book,” The Sound of the Gentle Dove” a compilation of speeches delivered at official functions by Omotade Ayodele as State Coordinator NYSC Delta State. The occasion was also used to distribute letters of promotion to deserving Staff.

The outgoing Director had also a few days before yesterday received a surprise send forth ceremony at The Apostolic Church, Asaba District Centre, Asaba where he rendered service as an Elder. The entire secular and spiritual worlds wish this astute administrator whom many call “Head of Service”, “Principal”, “Teacher” or “Permanent Secretary” because of his commitment, hard work and dexterity on the job, success in his new assignment.