The days of police barricades at strategic places in Anambra State may soon be over. This follows the judgement by an Anambra State High Court which has ordered the Anambra State Government and the state Commissioner of Police to remove all roadblocks in the state.

In his judgment in the case of Francis Moneke v. Anambra State Govt. & Ors. (A/Misc. 194/2021), delivered last Tuesday, January 25, Hon. Justice Ike Ogu held that the government and police had no legal justification whatsoever in erecting roadblocks on major roads in Anambra State in the guise of checkmating insecurity. 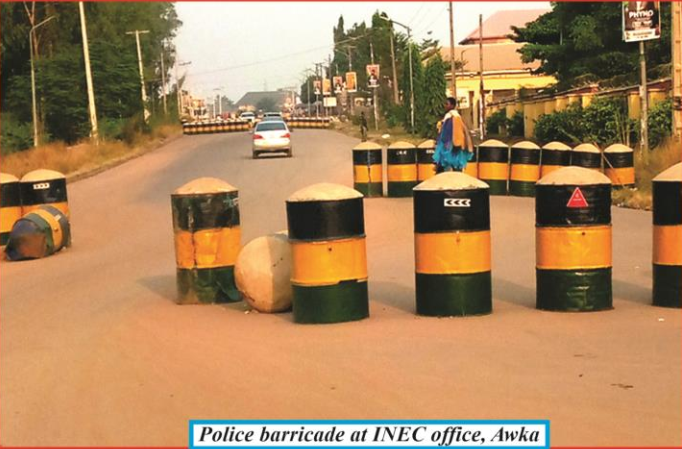 It will be recalled that roadblocks or barricades in parts of the state came up in response to a series of attacks by those now known as unknown gunmen on security personnel and facilities, as well as correctional centres. The attacks had resulted in the killing of many security personnel across the state.

But even after the attacks subsided, the barricades have remained, occasioning hardship to road users who have had to make detours to get to their destination. The barricades have also been causing traffic jams  at places they are set up.

But in his judgement on the matter, Justice Ogu held that such illegal blockage flagrantly violated the applicant’s right to freedom of movement.

Consequently, the court ordered the Anambra State Government and police to immediately remove every such roadblock in Anambra State to allow free movement of persons and vehicles.

The respondents were also ordered to pay some amount of money to the applicant as compensation for the violation of his fundamental right to freedom of movement.

But days after the judgement, and as at the time of this report, the barricades had remained. Attempts to get the response of the Anambra State Government and the State Police Command on the matter yielded no result.

The Police Command’s spokesman, DSP Tochukwu Ikenga, when contacted, said he had yet to get any information on the matter, while the Commissioner for Information

and Public Enlightenment, Mr C. Don Adinuba, could not give his response.

Subsequent requests by this reporter on the police/journalists Whatsapp forum for their reaction met a brick wall as the police remained mum.

Fides’ check at one of the barricades last Wednesday evening revealed that some police men were there collecting money from road users, prompting speculations that the court judgement might not be obeyed.