Religious tension is a situation in which religious adherents are involved in a serious disagreement or argument with one religious group and another. A religious war or a war of religions, sometimes also known as holy war, is a war which is primarily caused or justified by differences in religion.

The violence between the Israelis and the Palestinians today is an example of religious and political conflict. Although some religions are fighting over doctrinal differences, most conflicts stem from more secular causes_ a desire for political power, a struggle for resources, ethnic rivalries, and economic competition. During violent religious conflicts, many people have been killed, maimed and wounded.

There have also been wide spread disruption of economic activities with negative effects on productivity. Hundreds of churches, as mosques, hotels and other related businesses as well as vehicles, private homes etc, have been destroyed.

The majority of Nigerian’s population of about 185 million follows are either of Islam or Christianity. Historically, these two major religions have coexisted peacefully. However, since independence, the country has suffered from many ethno-religious conflicts. In recent years, the number of deadly attacks has increased due to the growth of extremist groups such as Boko Haram, Bandits and radical Fulani herdsmen. These attacks exasperate existing ethno-religious tensions and threaten national security.

Since 2008, Boko Haram have been an increasing threat to national security. The terrorist organization is ranked the 4th deadliest terror group in the world and aim to establish an Islamic state in northern Nigeria. It opposes the Westernization of the country, to which it links Christianity.

The Islamist militant group conducts terrorist attack on religious and political group as well as civilians. Victims are both Muslims and Christians. There are estimated 2.5 million displaced people in the Lake Chad Basin and over 300,000 Nigerian refugees as a result of the conflict. The effects of this conflict are far-reaching and have eroded social and political stability, resulting in a threat to national security.

Another religious conflict in Nigeria is that of the farmer-herdsmen conflict. Violent clashes between radical Islamist Fulani herders and Christian farmers are increasing due to a number of reasons. Climate change is one factor. The Fulani are traditionally semi-nomadic pastoralists based in the north of the country, but due to desertification, they are being forced southwards in search of water and grazing pastures.

Christian farmers in turn view the Fulani, who always carry weapons, as encroaching on their land. The situation is exasperated by the government’s failure to manage land. The consequences of these religious conflicts are immense. They have undermined traditional leadership, threatened national security and caused huge economic loss. 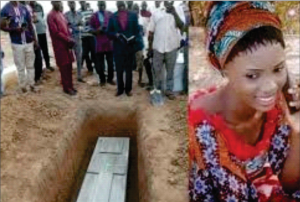 The violence has also exasperated existing religious tensions and as a result given rise to  deep suspicion and distrust between Muslim and Christian communities. As a result, there needs to be both a top-down and bottom-up approach to resolving the religious conflict. Religious violence in Nigeria refers to Christian-Muslim strife in modern Nigeria, which can be traced to 1953. Today, religious violence in Nigeria is dominated by the Boko Haram insurgency, which aims to establish an Islamic state in Nigeria.

Confusion may arise over whether a terrorist group has a religious agenda, a political agenda or both. But we can decipher this from the history of Islamic Religion. Religious conflict has a long history and it characterizes several groups today. At the same time, religious conflict may be used as a front for a hidden political agenda. The Crusades help us to understand the long history of religion and violence. The violence between the Israelis and Palestinians today is an example of religious and political conflict.

CAUSES OF RELIGIOUS CONFLICT IN NIGERIA

In Nigeria, among the causes of religious conflict are marginalization, oppression, and government influence, uneven distribution of wealth and resources, division in government, nepotism and socio-religious bigotry. The newest form of religious intolerance in Nigeria is the activities of Boko Haram Islamic fundamentalist sect that is currently threatening the co-operate existence of the Nigerian state.  This sect has demonstrated high level of intolerance in the country by unleashing terror on both Muslims and non-Muslims alike.

YOUTH AS AGENT OF CHANGE IN SOCIETY

Youth is the revolutionary age, possessing a great level of potential and motivation. It would not be wrong to title  the youth as the Powerhouse of infinite energy and the Pride of the nation. The best way for the youth to manifest their ingenious ideas and implement their fresh policies for the upliftment of the nation is politics. Youth must be given adequate opportunities to showcase their skills and must be propelled to represent themselves in politics as leaders. Our youth are agents of change, young people’s inclusion in the peace and security agenda and society more broadly, is the key to building and sustaining peace.

Their role in the workforce and economic development of our nation is critical as they represent, at any given moment, one-third of the workforce in our country. In these times of change and conflict, young people also have an important role in deterring and solving conflicts and are key constituents  in ensuring the success of both peacekeeping and peace building efforts.

They are taking to the streets and using online social networks and communities to connect, express their views, and campaign for change. They are protesting against authoritarian regimes, corruption, and inequalities. They are fighting for sustainable development and a better future for current and new generations. Young people have the ideas, the creativity and great energy to shape a better world.

Young people are full of hope and through innovation and imagination, they are problem solvers and have a great potential to generate a positive social change in the world. The role of the youth is simply to renew, refresh and maintain.

Youth have a role to renew and refresh the current status of our society including leadership, innovations, skills etc. Youth are expected to advance the current technology, education, politics, peace of the country. We all are familiar with the phrase “Youths are the future of a nation, the builders of a nation.” Indeed they are!

Unfortunately, the challenges on a global scale are clear, as reported by the United Nations Division for Social Policy and Development of Youth: 200 million youth live on less than US$1 a day, 130 million are illiterate, 10 million live with HIV, and 88million young people are unemployed.

A CLARION CALL TO EVERY CHRISTIAN IN NIGERIA

Today, we are surrounded not only by occultism and satanic worship but also by personal idols of greed, materialism and pleasure. Some of these constitute the thorns in Jesus’ parable of the sower that choke the Word, preventing us from bearing fruit.

The world is a dangerous place to live, not because of the people who are evil, but because of the people who don’t do anything about it( Albert Einstein) It was John Maxwell who said, “Successful leaders have the courage to take action while others hesitate.” We don’t need a new day to start over, we only need a new mindset. If God is everything we have, we have everything we need.

Sometime, we wrestle in prayer to achieve or harness God’s will and to bring the performance of his words, it is not always a free gift, neither is it easy. Things change, people change, places change, friends change, careers change, economies change, laws change, BUT GOD NEVER CHANGES. God never disappoints the expectation of any man. He is attracted to those who are hungry and leaves those who are satisfied with where they are.

I join with the countless voice today, as well as those yet to be heard someday___ those who will now have to do so through the gift of life, in giving God the glory for His sovereign hand in this historical revolution going on in Nigeria. Christians everywhere ought to humbly celebrate the decision of Mr. Peter Obi to liberate our country. In addition to saving of countless lives of our collective humanity, this decision also positions us more fully to intercede on behalf of God’s mercy on our nation in order to reverse the crime epidemic.

This is because Scripture states that when innocent blood is shed, we can expect more innocent blood in the society to shed through violence and oppression( Psalm 106:36-42, Joel 3:19) If a political party does not have its foundation in the determination to advance a cause that is right and that is moral, then it is not a political party; it is merely a conspiracy to seize power( DWIGHT D. EISENHOWER, Speech, March 6, 1956) If you want to know someone’s mind, listen to their words.

If you want to know their heart, watch their actions. Faith does not make things EASY but faith makes impossible things possible. Let’s trust in God. If you are emotionally attached to your tribe, religion or political leaning to the point that truth and justice become secondary considerations, your education is useless. Your exposure is useless. If you cannot reason beyond petty sentiments, you are a liability to mankind.( Late Dr. Chuba Okadigbo)

Great men and women of destiny are not determined by the type of materials they wear or the type of shoe they put on but something inside them calls for attention. Smith Wigglesworth said, “Great faith comes out of great tests, also, Great victories come out great battles.” We attract what we expect and we reflect what we desire. Again, we become what we respect and we mirror what we admire. John Wesley, the founder of the Methodist Church made this statement, “It seems that God is limited by our prayer life. He can do nothing for humanity unless someone asks Him to do it.” Let’s do the needful!