The governor of Anambra State, Prof. Chukwuma Soludo, has called for the immediate and unconditional release of the leader of the Indigenous People of Biafra (IPOB), Mr Nnamdi Kanu, offering to stand as a surety for the secessionist leader if he is released to him and if the federal government finds it difficult to release him unconditionally.

Soludo spoke during the flag off of the campaigns of the All Progressives Grand Alliance, APGA, attended by the presidential candidate of the party, Prof Peter Umeadi, and other candidates of the party in the state and the Southeast.

But the Indigenous People of Biafra, IPOB, the group headed by Kanu, has rejected Soludo’s offer, insisting that their leader should be released by the federal government which, it said, should obey the court order for Kanu to be freed. 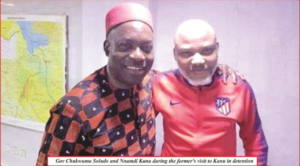 Soludo, at the rally had said, ‘I am making a passionate appeal to the federal government to release Mazi Nnamdi Kanu unconditionally. If he cannot be released unconditionally, I want him released to me and I will stand surety for him.

‘Some time ago, we set up the Truth and Reconciliation Committee to find out the root cause of insecurity in the South East and they have almost concluded their assignment.

‘But this issue of insecurity cannot be well addressed without bringing to the table the key players in this matter.

‘We must bring him to the table because we need him to be part of this process and I call on the federal government to release Nnamdi Kanu to me for us to have a comprehensive discussion for the fate of the Southeast.

‘If we cannot release him based on the court process, I hereby offer myself as the surety for his release and whenever you want him, I will hand him over to you.

‘We shall provide him shelter and give him home, and we make this plea in the true belief in the spirit of peace in the Southeast,’ he said.

But reacting to Soludo’s offer, the Indigenous People of Biafra rejected his gesture to stand as surety for its leader, Kanu, to be released, pointing out that the stage where its leader needed surety for any bail had passed, with Kanu having been discharged and acquitted of every charge.

IPOB, speaking through its secretary, Emma Powerful, in a press statement, said the call should rather be for the federal government to respect its own court and grant the detained Kanu freedom.

‘We welcome the call by the Governor of Anambra State, Charles Soludo, for the unconditional release of our leader, Mazi Nnamdi Kanu.

‘But the said call for the unconditional release of our leader is belated and coming three months and one day after the Court of Appeal, Abuja Judicial Division, in its erudite judgement, delivered on the 13th day of October, 2022, discharged and acquitted the leader of IPOB and all the remaining 8-count amended charges preferred against him.

‘The court consequently directed for his unconditional release in the landmark judgement. It further prohibited the Federal Government of Nigeria from further detaining our leader or even presenting him for trial on any indictment or offence whatsoever before any court in Nigeria,’ Powerful stated in the press release.

The group said Kanu no longer had any form of indictment, and could therefore not be said to be suretied; rather, it said, Soludo should add his voice for the unconditionally release of its leader.

‘It is important therefore to clarify that our leader, Mazi Nnamdi Kanu, has no form of indictment or even charge pending against him today before any court by the authority of this Judgement.

‘The issue of granting bail or otherwise does not arise by any stretch of consideration or imagination because it is the federal government that is today in breach of this order of superior court of competent jurisdiction.

‘It is to be emphasized further that Onyendu who was discharged on the 13th Day of October 2022 by the Court of Appeal does not have any need for surety because there is no charge hanging on his neck today.

‘We have gone beyond issue of surety or no surety. Every genuine call/demand in the prevailing circumstance should be firmly directed at calling on the Federal Government of Nigeria to immediately obey the order for the unconditional release of Onyendu made by its own court.

‘May we also remind Governor Soludo and others, that Onyendu’s current incarceration is not sanctioned by any law known to man. It is unconstitutional and an affront to constitutional democracy and rule of law.’

The group said Soludo’s kind of plea was the reason rulers of Nigeria had no regard for the rule of law.