The occurrence and frequency of Jungle Justice in Nigeria have been a major concern to human rights communities, state and non-state actors.  It takes away people’s right to life, and is a strong indication of lawlessness and lack of respect for rule of law, which of course is common in Nigeria.

It contravenes the Nigeria’s Constitution, section 33.(1) Every person has a right to life, and no one shall be deprived intentionally of his life, save in execution of the sentence of a court in respect of a criminal offence of which he has been found guilty in Nigeria.

Jungle justice or mob justice is a form of public extrajudicial killings in Nigeria where an alleged criminal is humiliated, beaten or summarily executed by a crowd or vigilantes. Treatments can vary from a “muddy treatment”, where the perceived perpetrator is made to roll in mud for hours to severe beatings followed by necklacing. 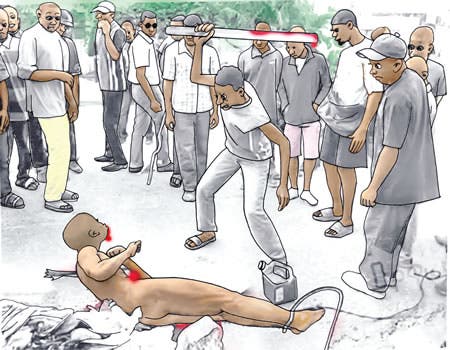 This form of street justice occurs where a dysfunctional and corrupt judiciary system and law enforcement have “lost all credibility. European principles of justice have likewise become discredited.

Jungle justice is rampant across sub-saharan Africa. Every day at least one person on the continent faces torture or even death at the hands of irate citizenry determined to be judge, jury and executioner.

Jungle justice is anything but just. It is a form of mob rule in which people take the law into their own hands and punish alleged offenders for perceived heinous crimes. Jungle justice is also referred to as mob or street justice and can lead to extra-judicial killing.

The victims are deprived of rights to which everyone is entitled under the rule of law. Punishment is normally barbaric, usually involving stoning or burning of the unfortunate individuals in a public place. Cameroon and Nigeria are said to have the highest rate of jungle justice in Africa.

Many jungle justices go unnoticed and underreported in Nigeria, because it has been able to blend itself into the national narrative of one of the ways ‘justice’ is dispensed. This ugly practice has advanced to the point where even our urban communities have become theatres for perpetrating this inhumane act.

In recent times, we have seen cases of people who have been lynched and set ablaze on mere suspicion of being thieves, kidnappers and the likes. This basically reflects the idea that state institutions of law and enforcement are dysfunctional and lack trust or confidence of citizens.

Over time, it has been discovered that some victims of jungle justice are often innocent and harmless people who are just unfortunate. There is no justification for jungle justice. It is an act of lawlessness, breach of rule of law, and inhumane.

Hauwa Yusuf, a criminologist at the Kaduna State University Nigeria, told DW that most jungle justice victims are innocent of the crimes for which they are punished. “A lot of innocent Africans have fallen victim to jungle justice,” Yusuf said.

Jungle justice has not reduced crime in Africa but has rather multiplied the number of human right abuses in the continent. “We need proper education and enlightenment for the people to tell them of the consequence of using extra-judicial measures when an individual has not been convicted by a properly constituted court of law.

African institutions need to counter the negative perceptions that surround them and show that they are there to address the issues of all citizens, then we can see eradication” of jungle justice.

Most Africans yearn for a society which is just and fair; a place in which everyone is presumed innocent until proven guilty. Governments must act to end jungle justice which has already taken the lives of so many innocent citizens.

Goal 16 of Sustainable Development Goals (SDGs) emphasized on Peace, Justice and Strong institutions. However, we cannot hope for such where jungle justice, no rule of law, torture, and conflicts are prevalent. Jungle justice has a destructive impact on country’s development; it is not inevitable and must be addressed.  Promoting rule of law, human rights and ensuring strong institutions of law and order are key to ending jungle justice in Nigeria.

We have also observed that there is no mechanism put in place to address this menace; such mechanism would have included re-orientation, public enlightenment, strengthening institutions of law and order, and sensitizing those who have the propensity to lynch suspects, and also introducing anti-jungle justice policy.