Christian Obi, a former Nigeria goalkeeper, says that an indigenous football coach can’t handle the nation’s senior team, the Super Eagles, for now because of some negative influences on the team.

Obi, a Health and Physical Education graduate of University of Ibadan, reckons that the present process of hiring coaches for the Super Eagles is never the best and consequently makes it difficult for any Nigerian to be selected to handle the senior national team. 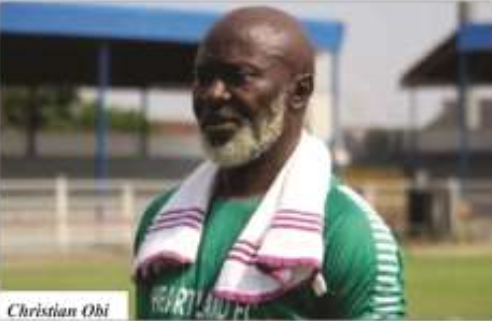 The 54-year-old shotstopper and Moscow ’85 FIFA U-20 World Cup bronze medalist who spoke during the ex-University of Ibadan Footballers Association interactive virtual program, said Nigerians have the qualities to handle the Super Eagles, but the recruitment procedures have made it extremely difficult, ‘if not impossible’ for any Nigerian coach to be considered good enough for the job.

‘It’s always the aspiration of any coach to coach at the highest level like the senior national team, Super Eagles’, starts the former Julius Berger and Iwuanyanwu Nationale goaltender.

‘We have good coaches who have what it takes to handle the senior national team. Nigeria is blessed with quality coaches, but the forces that have taken over the recruitment of coaches for the national team cannot allow a Nigerian to be there for now.’

Obi added: ‘The administrators, the agents and the scouts have taken over the job of the coaches, leaving their own jobs undone.

‘If proper professionalism is applied in the game, where everyone concentrates on doing his own specific job, coaching the Super Eagles will be easy for a Nigerian coach.

‘But for now, given the way things are at the moment, an indigenous coach handling the Super Eagles is not possible’ Obi concluded.

The Heartland FC interim coach would also hit hard on football policy makers for the lamentable state of football in Nigeria, accusing them of coming short in the provision of level playing ground for all clubs.

Obi reasons that absence of a level playing field for all in the domestic scene makes it extremely difficult for the country to have the best representation at the continental levels, because the lopsided system keeps producing half baked champions.

‘We have the potential to emerge tops at every football event in Africa and the world. But the inability of our football bodies to provide a level playing ground for all the teams has made it very difficult for us to be where we are supposed to be,’ he remarked

‘It has led to the downward turn in our football, especially the league. It’s so bad to the extent that the winners of our league cannot stand at par with those of other countries in Africa.

‘Before the start of each football season, we tend to have already decided who the winners would be and this has negatively affected our football tremendously.