Re: Touts Have Taken Over Anambra

The above caption caught my attention in your December 18 Edition. I took time to read through and decided to thank the Fides Media for their investigative journalism and for coming to the rescue of the poor masses who voted massively for the present administration and whose disappointment and frustration on what they experience everyday in the hands of youths mobilized by the same government to unleash terror on the people, cannot be quantified.

I have lived in Onitsha for over 37 years. I am a business operator. I have seen governments come and go. The issue of road decongestion started around 1994, when the government of the time decided to remove all vehicles wrongly parked on the roads. Some of them were abandoned by their owners, thus causing traffic obstructions on such roads.

Thereafter a group was retained to continue this exercise under the agency called ANSEPA. ANSEPA had a towing unit that did this job. The idea then was applauded. As the job of this unit progressed, people then became conscious of their activities and started driving properly in order to avoid their troubles, with the result that they may work through the day without contravening anybody.

Before then, the towing business had become a money-spinning venture and contractors moved to Government House, mainly party loyalists, to solicit for the job of road decongestion. They paid huge sums of money to the governor to get this contract with the result that in the field, they did all manner of odd things to recover their money, with the governor, having collected heavy gratification from them, looking the other way. 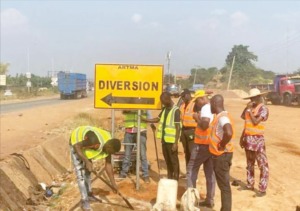 This is the current method adopted by the present uniformed men employed by Soludo. Just two weeks ago, they caught a trailer around DMGS Roundabout and were driving through ABS Junction which usually experiences heavy traffic. On getting to the junction, they jumped down from their shuttle bus, ran up to the junction and started directing traffic.

What we saw next was a trailer coming up with speed against traffic, and behold it was one of these uniformed men on the steering, and then it was difficult for him to negotiate toward the road leading to former ABS. People were shouting, the boys were commanding vehicles left, right and centre until they managed to leave the place with the trailer.

Their activities waned for 11 years when Chris Ngige and Mr. Peter Obi ruled the state. They came back during the 8 years of Willy Obiano, though not uniformed. Today the story is terrible. How do I start? What will I say? Horrible!!!

The Fides report used two scenarios of Mrs. Josephine Eze, a Road Safety official, and a banana seller, to illustrate what residents go through in the hands of these uniformed touts. I can bet you that the entire pages of one edition of Fides Newspaper will not be enough to narrate what people see every day on our roads.

There are scores of protests, but like the other governors who contracted these jobs out, Soludo never bothers. Now three weeks ago, my daughter sent in something from Ibadan and asked me to collect it at the park near the Abada Market under the Bridge. I already knew what I would see there. If not for my daughter, nothing would have taken me there in my car. I usually go to that side in public transport.

Now at the part, the Yoruba driver who gave me the stuff started directing me on how to beat these uniformed touts that filled the entire route. He said my place (state) was terrible and wished me luck.

‘If they catch you, na N50, 000 Naira oo,’ he shouted at me. Now on the road, these touts were directing me to park but I refused and continued to move. Meanwhile the Yoruba driver had warned me not to stop for them; that if I did they would charge me with wrong parking.

You see, they will ask you to park and if you do they will jump into your car and accuse you of wrong parking. Remember this is Niger Bridge, the gate way to Anambra State “The light of the Nation” through which visitors pass. Some are merely passing through to other states. These uniformed touts will ask such visitors to park and go ahead to apprehend them for parking wrongly.

Now Mr. Emeka Okonkwo will come up with a defence that they are working to checkmate the excesses of these agents, bla! bla!! bla!!!. Now let’s reason together. In Onitsha alone, these boys are not less than 500 in number. They hire shuttle busses, at least 20 in number, and fuel them.

If they do not work as they are doing now, how will they pay such number of people and satisfy the government that they work for?

One thing beautiful about democracy is tenure. Soludo has four years and he will come back to Onitsha to solicit for votes. I can authoritatively tell you that even if there is a major disaster in any market in Onitsha, he cannot pay a sympathy visit. It is that bad. His people are living in Onitsha and they will tell him better. Today, these uniformed men are not working to decongest the roads; they work for their pockets and to satisfy people at the corridors of power.

No reasonable government will depend on money raised from such source as road decongestion for development. Peter Obi came and worked with international donor agencies to develop the state and he achieved much. Soludo should realize that money being remitted from Onitsha and other places through these touts by whatever name they are called, is counterproductive.

The people who cough out this money will continue to place a curse on him and his government. They do not mean well for the people, otherwise why would you collect as much as N50,000, N30,000, for such a minor traffic offence as wrong parking, assuming the vehicle is actually parked wrongly? And then Emeka Okonkwo’s ARTMA is the contravener, the prosecutor and the Judge – everything. The offence of that magnitude is not supposed to be more than N5, 000 fine.

Please my sincere appreciation to the Fides Team – God Bless you!