Mr. Jude Atupulazi is unarguably one of the most experienced journalists in and from Anambra State. At this terminal stage of Governor Willie Obiano’s tenure, he is about the only rational voice among the core media practitioners in the state.

Even when there appears to be a conspiracy of silence among the mainstream journalists, Jude is the only audible voice saying things about the state the way he sees them and as they are, for the edification of society.  Among others, the editorials of Fides Newspaper which he edits have remained consistent in pointing out lapses in the governance of the state. Most times there are cathartic reactions from Gov.

Willie Obiano while supposedly trying to solve the problems pointed out by Fides Newspaper.

Jude’s last piece entitled, ”Assessing Obiano’s 7 Years”, started off by stating that his stance was “neither as a government sympathizer nor as a member of the opposition, but simply as an interested bystander”. He proceeded as pledged, but the snag was that his final scores were incongruous with his analysis. Besides, he assessed Obiano purely from the prisms of government’s propaganda, which is the only language they understand. 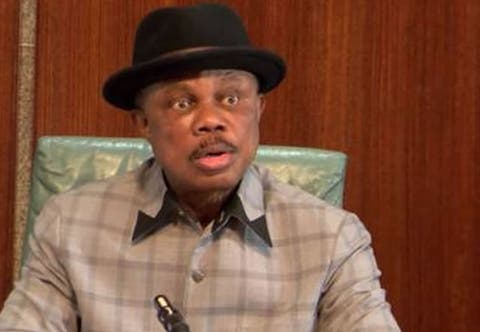 Yes, their propaganda attributes everything Obiano does as the biggest in the East, Nigeria and Sub-Saharan Africa. This is the reason the Oxygen Plant Complex at Amaku Hospital that is barely larger than a boys’ quarters is trumpeted as the biggest in Nigeria.

By the same long-winded propaganda, Obiano has built the longest bridge in the East, the most beautiful fly-over in Nigeria and now the airport with the longest run-way and with the most technologically-compliant facilities.

Jude commenced his assessment with the Awka fly-overs.  Awarding it a mark of 40%, the assessment merely tried to accommodate the views of many government e-rats who are about the only ones commending it. Jude was right that the initial design of the road from Amawbia to Amansea was to be like Onitsha Bridge Head for which completion his predecessor even set money aside.

Drowning in vain-glory, Obiano abandoned the initial plan and used the money his predecessor, Mr. Peter Obi set aside for the project, to construct the three fly-overs. Is it not a disgrace and let-down that after seven years, he is yet to complete the road? My own assessment of the fly-over is 20 per cent.

Yes, because due to structural failures that compound the traffic problems the project was set to solve, it is fit, as submitted by Sen. Chris Ngige, for demolition, which will gulp its own millions of Naira. Is this not purchasing problems for one’s self?

On security, Jude rated Obiano 70%; thus contradicting his own fair assessment. He wrote: “The state is certainly safe enough, but being the safest is what I can’t vouch for. All this while, parts of the commercial city of Onitsha have been no-go areas in late evenings, especially at Upper Iweka, Obosi and Nkpor. Even as I write now, no one can go there in the night and feel free.

In Awka, it is never safe to walk in some areas carrying your personal effects like hand bags and mobile phones in the twilight hours. That was why I once wrote that the state might not be in a position to stave off any serious crime wave were it to arise.

I believed that the entire Southeast was then witnessing a general lull in crime. I said this then because what I saw on ground wasn’t what I felt could stop crime”. Should this beautiful analysis be messed up with an award of 70% to Obiano? 30 per cent should be more like it.

Jude was right in his analysis on security. Once upon a time, the entire South-East witnessed incessant kidnapping which simultaneously stopped.

While other Governors in the South-east moved on, Obiano daily boasted of how he used drones to stop kidnapping in Anambra State. It is rather amusing to note that they mistook hosting a security summit, which any state could have done, for pragmatic action against crime.

On Jude’s assessment of the operation of CCTVs, the rating should have been negative considering the billions of Naira quoted to have been used in their purchase with no known feat recorded. Could this be one of the ploys designed to retire the N1.2 billion monthly security votes?

It will be recalled that Governor Obiano stopped the contribution of the State government towards payment of stipends for vigilante services in the state as his predecessor did and with tremendous success. Obiano is yet to replace the security vehicles his predecessor bought for all the towns in the state and has not procured a single Armoured Personnel Carrier for the Police.

On street lights, Jude by scoring Obiano 70 per cent, got an ‘F’ himself.  The basic philosophy behind conception of projects is based on their utility and sustainability. Why would a State Governor install street lights in villages and even on roads started by his predecessor, which he is yet to complete anyway?

Are those street lights of more economic importance than completion of abandoned roads hosting them?  Is Jude aware that many generators are mounted all over the place to power those street lights? Having made enquires, I was informed that over N1 billion per month is expended to operate the street lights. No wonder our roads and other critical infrastructure are left to rot.

Interestingly, the contractors that mounted those street lights are still being owed – giving additional burdens to the successor-administration. I believe a sensible in-coming Governor would dispense with such vain-glory and focus on utility value of projects. Should such an ill-conceived and unsustainable project not attract a negative rating rather than the 70% awarded it by Jude?

On road net-work, Mr. Atupulazi submitted: “Once upon a time Anambra was touted as the state with the best road network. It now seems like it was in ancient times. The roads have virtually collapsed, with gaping potholes all over the place. It is now a matter of choosing which pothole to dodge or which one to enter.

That is as bad as it has become”. After this apt analysis, it is a wonder that he still scores Governor Obiano 50% instead of 20%.  Again, Jude’s analysis was at variance with his score. Here is an administration that has abandoned over 90% of inherited road projects/contracts, as well as more than 80% of those it started.

On the on-going International Conference Centre (ICC) project, Jude also noted the submission of most Anambra people: “But my problem is whether it is a priority project as against being a prestige project. This is because we already have the Dora Akunyili Women’s Development Centre”.

Indeed, he admirably noted the facilities at the Centre which should be improved if need be than to build another Centre. This is in line with our conviction that it is a waste of funds by an administration that abandoned many projects in Awka that are even more important because of their utility, examples being the shopping mall and numerous roads.

The ICC project merits a negative score because it ought not to have been embarked on in the first place. Did the administration consider the cost implications of maintaining that edifice?  We must emphasize, again, that projects should be propelled by need rather that prestige or vain- glory.

The commentary on Anambra Airport comes with the recent revelation by “APGA Alaigbo“ that N800 million has been budgeted to invite all sorts of groups for the inspection of the project. This, as far as I am concerned, summarizes the reason for its conception.  But then, what is N800 million to a Governor who approved N5 billion for the celebration of his first 100 days in office?

In due season, the people of Anambra will be informed of how much the Governor had earlier spent in inviting groups to “inspect” the airport. In scoring the Governor 70% for the airport project, Jude apparently is unaware that at the flag-off with some unknown Chinese posing as the representatives of Sinochem Company, Obiano boasted that Anambra State would not contribute a Kobo in the building of the Airport.

More surprising in the score is that Jude sees the project more of “a prestige project than a necessity at this point”. Indeed, he rightly observed that: “Like the Conference Centre, this falls short in terms of need. Anambra is surrounded by airports in Asaba, Owerri and Enugu, a development that does not necessitate Anambra having theirs for now except to do so in order to belong to the league of states with airports”.

He was also on point when he asked: “Besides, of what need is an airport which gulps much money when the roads leading to it are bad?” It is not just the road leading to the airport, but roads all over the place. We want to mention Y Junction on Okpuno Road, Awka; the junction of Old INEC Road and Abakiliki Street; the road from UNIZIK Temporary Site to Okpuno; among several others.

On Awka Stadium, Jude scored Obiano 90%.  One must acknowledge that it is the only score that balances his submission on the subject. However, his analysis here was faulty. I urge him to personally visit the stadium and not rely on what the Obiano e-rats post on social media platforms. The fact is that Governor Obiano merely completed the portion of the stadium started by his predecessor who awarded it to Paul-b Construction Company and no wonderful job has been done there.

On 5% rating for the lies on export of Yams, Ugu & Nchuanwu Vegetables, Jude did a disservice to our values.  Why would you award marks to obvious lie? Liars should be spanked rather than be commended in any way. The score here should have been negative as in the case of over 500 MoUs supposedly signed without one implemented. It is a case of self-deceit.

Jude correctly reviewed Obiano in terms of human resources performance. According to Jude, “In trying to be nice, he has made many appointments, many of which are however unnecessary.

He has made history as the only governor in this state with the highest number of political appointees, half of whom do nothing but drain the resources of the State”. The fact is that with over 2,000 appointees, it is now dishonourable to answer an assistant to a governor. In some cases, we have families where father, mother, and about 3 children are all aides to the Governor

All in all, Jude’S analyses are correct except his scoring method. However, he omitted some variables any comprehensive analysis of Obiano must include. He forgot to tell us about Obiano’s inherited N75 billion that is believed to have been squandered.

How do we explain that a man who inherited a debt-free State is about bequeathing over N200 billion debts? As if the recklessness is not enough, he is owing contractors over N100 billion as well as gratuities since 2017. Do all these justify the euphoria of an airport that will cost less than N30 billion?

The assessment of Obiano’s tenure to date should also cover the promises and pledges he made in his inaugural speeches for his first and second terms. In over seven years, he has not fulfilled 20% of what he promised. Examples abound: to build a Power Plant in each of the state’s three senatorial districts; will never owe on salaries, gratuities and pensions; youth and women empowerment, among others.

Let Willie Obiano know that beyond the airport and Conference Centre, Anambra people are eagerly awaiting the end of his tenure. There will be stunning revelations on Savings, Accumulated Debts, Mortgages, among other critical legacies, which will really rate him as the worst Governor since the creation of Anambra State.

Chief Barr. Uzodike was a former Commissioner in Anambra State