Queen Mother of the Royal Son and Sibling Rivalry

The phenomenon of rivalry among sibling manifests itself in more forms than one. The failure to acknowledge Mary’s motherhood is one of the most evident manifestations of sibling rivalry. Beyond the fact that some Christians manifest their love for Christ by the measure of their hatred for his mother, some abhor her motherhood by the measure of their displeasure for others’ intense loving devotion to her.

As such, some call into question the unique honour she has always received, beginning from the early disciples as the mother of our Lord. For such Christians, the Virgin Mary is at the periphery of the economy of salvation, and at best, an inconsequential factor in salvation history. However, Mary remains a central figure, rather than a circumferential factor, in the economy by the gracious will of God.

The acknowledgement of her motherhood has been universal and unanimous until the eruption of dispute among believers, brethren in Christ, on the question of the salvation of the just that resulted in a division of the Church into denominations in the 16th Century.

As a result of such crises, Christians, spiritual siblings in Christ, developed different ecclesial traditions. Since there is no unbiased reading of the Scripture, these denominational traditions formed the hermeneutical structure and theological matrix for reading the Word of God. The contingency inherent in all human reality informs the development of denominational idioms, colours the perspectives and constitutes the framework for understanding.

Precisely because every reading is interpretative, these denominational traditions exert an overarching influence on each denomination’s scriptural interpretation, for every foreground has a background. Verily, no one speaks from nowhere. Were intellectual epoché to be possible, many people would read the Scripture relative to Mary differently. Unfortunately, this is not realistic. Hence, we can only interrogate our traditions and backgrounds to reach some level of objectivity. 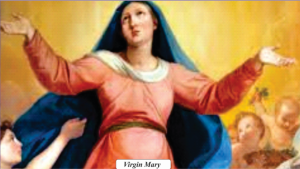 Without knowing it, some brethren in Christ operate from immured camps and exaggerate their idiosyncrasies such that they become deaf and blind to the harmony of faith. As such, everyone is content with absolutising his position in opposition to his brothers. The radicalisation of such views spanned centuries that it constitutes traditions in and through which everything is read. As a result, acknowledgement of the motherhood of Mary suffers a big defeat.

These Christian brethren reject it vehemently, in part because their fellow Christian brothers of other denominations hold it dearly. This accounts for why a Bible-believing Christian would easily ignore copious evidence relative to the specific and unique place of Mary in the Scripture.  Sadly, because of denominational traditions, the adherents read those portions without really seeing them, or rather they resort to an interpretation that strips the passage of any importance or uniqueness.

It is only on such a basis that a believer can ignore Mary’s declaration that “all generations will call me blessed” (Luke 1:48). It can only be possible that a Bible-believing Christian would have special love and honour for his mother and remain indifferent to the mother of Jesus when he or she reads the Scripture with selective amnesia or default biased mode.

Granted that some siblings over the centuries exaggerated the honour to the mother of Jesus and mother of Christians, however, it is not enough warrant to dishonour or to be indifferent to her. Error always resides in excess or defect, and we ought to guard against such.

Going through the Scripture, the use of typologies helps one to appreciate the status of the queen mother in the Davidic kingdom and funds the spiritual warrant for subscribing to the queen motherhood of Mary. The mother of the king, who is referred to as the queen mother, was a woman with the greatest honour, advocacy power and intercessory efficacy of significant consequence. Ascribing the p

osition of a queen mother to the mother of the king liquidates foreseeable dire consequences in the family since the kings of that era were polygamous, of which David who married several hundred of wives serves a good illustration (cf.1 king 11:3).

In such a situation, safely, the mother of the king played a significant role.

The position of queen motherhood enables the king’s mother to occupy a post at his right hand, which is symbolic of her unique participation in the power, dignity and honour in the reign of her Son, the king. Consequently, in Judah, kings were honoured alongside their mothers (cf. 1 and 2 Kings). “Say to the king and queen mother: Take a lowly seat” (Jeremiah 15:18, 20). Similarly, the king and his mother were the addressees of the prophecy about the destruction of Judah.

Another obvious example is the case of Bathsheba, who was the wife of David and mother of Solomon.  Parsing her life in those two positions makes evident that as the wife of David (1 king 1:16-17, 31) she was lowly and humble, but as the mother of Solomon, she exuded power, dignity and honour (1 king 2:19-20). The attitude of Bathsheba as wife and mother is a study in contrast.

In the prophecy for the future liberation and salvation of God’s people, Zion, the queen mother was an integral part of the salvation plan (cf. Isaiah 7:13-14) and even in the future salvation of the messianic period (Isaiah 9:6-7, 11:1-2), which was confirmed in Mathew (cf. Matt. 1:23). Reading the Scripture with the hermeneutics of faith and continuity obviates any doubt about the suitability of comparing the queen motherhood of Mary in relation to Christ to the Old Testament typologies.

The confusions are elided by the fact that the hidden mystery of God came to a manifest, definitive and final revelation of Christ in the New Testament. Hence, since Mary is the queen mother of the royal Son of God, all the siblings of the Lord, Christians, should go beyond their differences and honour our mother Mary this month of May.